"She's daring, risk-taking, dynamic, death defying all while receiving little or no recognition for her on-camera attributes in doubling for some of hollywood's A-list actresses."

LOS ANGELES, CA, September 15, 2016 /24-7PressRelease/ -- The ninth annual Action Icon Awards celebrates risk-taking stuntwomen, along with action-oriented actresses and extreme sports stars, who are often the unsung heroines of the film and television industry. During the two-hour private red-carpet awards luncheon on Sunday, October 16, 2016 at the Sheraton Universal Hotel in Los Angeles, these pioneering women and living legends will be recognized in over 12 categories. Top honorees include the Diamond in the Raw Award - Alana Mayo, Vice President of Production, Paramount Studios; Limbless, world class aerialist Jen Bricker (jenbricker.com), our Dare2BDifferent Award honoree, an award previously given to Paralympic Snowboarder Amy Purdy and Gold Medalists Gabby Douglass and Laila Ali. Melissa Stubbs will receive the HELEN GIBSON Award - which pays homage to a veteran stuntwoman with over 30 years of industry experience. Other deserving individuals will be honored in other categories including JEWEL, GEM, Dynamic Duo and the coveted Stuntwoman of the Year, with a Special Achievement nod to groundbreaking stuntwoman/stunt coordinator Julie Michaels.

Hosted by Nina Parker of Access Hollywood & VH1, the award show will illuminate the adept stuntwoman. She's daring, risk-taking, dynamic, death defying all while receiving little or no recognition for her on-camera attributes in doubling for some of Hollywood's A-list actresses.

Conceived by Veteran Stuntwoman LaFaye Baker, the awards show benefits the Diamond in the RAW Foundation - a Los Angeles based non-profit organization serving at-risk teen girls in foster care. "As a product of the inner city, I am a firm believer that 'if you see it, you can be it.' I established Diamond in the RAW to show young girls the myriad of opportunities behind the camera and to honor my peers in the stunt community whom are often overshadowed by their male counterparts," says Baker.

The media and celebrities are also invited to learn stunt techniques; how to get set on fire, wield weapons, fight and fall from the sky and safety precautions during the Stuntwomen's Coordinating Conference from 8:30 am - 4:00 pm on Friday, October 14 at ShowBiz Studios - 15521 Lanark St., Van Nuys, CA 91406.

The Action Icon Awards are being sponsored in partnership with SAG/AFTRA, CBS-TV, US Bank, Marika, Inc., the McGrath Abrams Family Foundation, Stone Cold Action Productions and Mixed Chicks. Guests will take part in a silent auction, one-of-a-kind opportunity to meet and greet with top Hollywood Stunt Coordinators, and experience a live-artist performance by Deja, a 17-year old musical prodigy and former contestant on NBC's "The Voice."

For information about the event, sponsorship opportunities and tickets, please visit www.actioniconawards.com or call (800) 566.4714, ext. 84. Tickets are now on sale HERE. 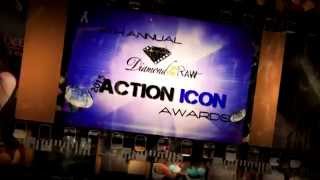