Ex-Googlers release 2.0 of popular board game

The reception we got when we released King of Carrom back in October surpassed all expectations.

LONDON, ENGLAND, April 28, 2017 /24-7PressRelease/ -- King of Carrom 2.0 has finally launched after much anticipation. The app which brings the popular Indian board game onto mobile screen devices, burst onto the Google Play Store last August to great reception. It racked up 65,000 downloads in a month and topped the Google Play Charts in Asia.

King of Carrom is the first release from Branch Productions, a game studio set up by ex-Googlers to focus solely on producing games for the Asian market.

"We are really excited by this release," said Jonas Espvall, Co-Founder. "The reception we got when we released King of Carrom back in October surpassed all expectations. For this release, we have actively engaged with our community and focused on features they would like to see as well as improvements to the King of Carrom experience. I feel we have achieved that and can't wait to give our audience what they have been asking for."

Fellow Co-Founder, Rizwan Khan, is already thinking about the next stage. "I am confident this release will meet expectations and can't help but think about the next stage. What surprised us most was traction in markets such as the UK and US, which we did not anticipate. With that in mind, as well as the number of requests we have received so far, myself and Jonas feel it is time to start exploring bringing King of Carrom to iOS."

Branch Productions expects to get to one million downloads by the end of the year and expects to hit 10 million by the end of 2018. Download King of Carrom 2.0 today from the Google Play Store. 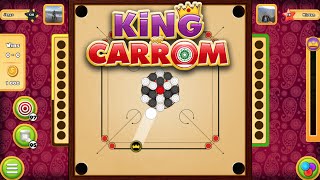