Borne from a passion for designing a timepiece that is the most iconic and New York City-inspired watch on the market, the Grand New Yorker Luxury Watch Collection is the first collection of its kind that is created solely for New York City.

"Our collection is pristinely inspired by the City itself, and designed to embody the City's unmistakable elegance and aura."

NEW YORK, NY, June 14, 2017 /24-7PressRelease/ -- The Grand New Yorker Luxury Watch Collection, an elegant, luxury timepiece with quality components and high end sweep movement that is designed specifically for New York City and conveying the city's style, this week officially launched an IndieGoGo crowdfunding campaign for garnering widespread support and the necessary financial backing to finish the production and initiate the shipment of the watches.

"Sure, there are countless design companies in New York City that produce their own watch, but none of these companies are dedicated to creating a watch that is purely for the City itself," said Aron Hidvegi, Founder of the Grand New Yorker Luxury Watch Collection. "Our collection is pristinely inspired by the City itself, and designed to embody the City's unmistakable elegance and aura."

The watch collection is modeled after New York in the 30s, a time that set the foundations of what New York stands for today. The finished result is a timepiece built with quality components, featuring a high-end sweep secondhand movement, and quick-release leather straps.

Quintessential New York features in the timepiece include the watch's dial, resembling the cult clock located at Grand Central Terminal. Furthermore, the hands have the silhouette of the Chrysler Building, giving the whole watch an unmistakable New York aesthetic.

Actor and musician Burn Gorman from the BBC series Torchwood, the HBO series Game of Thrones, the blockbusters Pacific Rim and The Dark Knight Rises appears in the Grand New Yorker campaign images.

"We've worked hard to select only the finest materials available to our team today," said Aron Hidvegi. "The Grand New Yorker is an embodiment of fine details and precise handiwork for the finished, iconic, and always eye-catching result. Spread the word on the official launch of our Indiegogo campaign today, and head on over to learn more about the timepiece while considering backing our production dream."

The new timepieces start at $99 each. 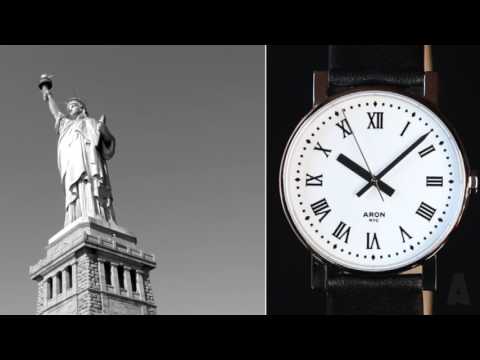