"Reel Sisters is still on the frontline of a movement to hire women of color behind the camera. We're thrilled to see women telling our stories on Netflix, OWN and BET. We hope Hollywood catches up."

BROOKLYN, NY, September 22, 2017 /24-7PressRelease/ -- Reel Sisters of the Diaspora Film Festival & Lecture Series -- the first Brooklyn-based festival to showcase films produced, directed and written by women of color -- turns 20 year this October. Reel Sisters is marking the milestone with screenings and events at venues in Brooklyn and Harlem.

"I'm thrilled Reel Sisters is still on the front lines creating spaces where audiences can enjoy stories," said Reel Sisters Founder Carolyn A. Butts. "We are proud of this year's film selections -- everyone can go home feeling nourished by the journeys each filmmaker takes us on."

Film lovers will make hard choices this year about whether to spend the day in Brooklyn at Reel Sisters Family Day Weekend (http://reelsisters.com/films/) at the Alamo or enjoy a strong film line up at Magic Johnson theater in Harlem.

On Oct. 21, Gabourey Sidibe (Empire) makes her directorial debut at the Magic Johnson 9 with The Tale of Four (TRAILER: https://vimeo.com/215710320), a film inspired by Nina Simone's "Four Women." Other noteworthy films being screened at Magic include HUSH (TRAILER: https://vimeo.com/215420714), a short drama set in London about a Nigerian family whose daughter stops speaking; Harlem Love (TRAILER: https://www.youtube.com/watch?v=-5gLqGmPtK4&feature=youtu.be), a 1920s couple whose love is tested; and Prudence, a World War II nurse who is struggling with dementia and the loss of her female companion since the war. Proclamation Punctuation is a fun and inspiring fashion film that pays ode to the exclamation point!

In Tourments D'Amour, two sisters living off the coast of Guadeloupe are forced to deal with a cold and distance father following their grandmother's death. This powerful narrative manages to stretch emotional tensions and bring the longing of an unfilled relationship between father and daughter to the center. The cinematography is excellent and lush. As a recipient of the Reel Sisters Best Narrative Feature, Tourments D'Amour (TRAILER: https://www.youtube.com/watch?v=T32ZSvFOULk) is deserving of the patience necessary to enjoy the story's slow unfold. The film is playing with That's Why They Calls Us Colored, a delightful short directed by Malika Franklin that explores what happens when a distance relative attends a family reunion and must come to terms with his family history.

At 7:37 pm on Oct. 21, audiences will have a chance to glimpse Sighted Eyes/Feeling Heart (TRAILER: https://vimeo.com/233263281), a new documentary on playwright Lorraine Hansberry's life. Marcia Pendelton, the founder of Walk Tall Girl Productions, will moderate a conversation with director Tracy Heather Strain on her successful efforts to create an intimate portrait on Hansberry's legacy as artist and activist.

The event will include performances by Spoken Word artist D. Cross and Urban Bush Women's Love Muwwakkil. She will perform the company's signature solo Bitter Tongue, a dance of resistance. Reel Sisters will premiere That's Why They Calls Us Colored, a short directed by Malika Franklin, featuring honoree Vinie Burrows as the lead actress.

Reel Sisters Film Festival offers affordable ticket prices. A one-day pass is $35 and a section pass is $12. Awards ceremony tickets are $45 ($35 for 2+ tickets). Purchase tickets at the website www.reelsisters.org. Reel Sisters looks forward to celebrating 20 years with film lovers from across the tri-state area.

About Reel Sisters of the Diaspora Film Festival & Lecture Series

A Brooklyn-based film festival founded by African Voices magazine and LIU Brooklyn Campus, Reel Sisters was founded to support women of color in the film industry. Since 1997, Reel Sisters has showcased over 1500 films produced, directed and written by women filmmakers in every genre. Reel Sisters attracts more than 1,200 film lovers from across the nation and globe including California, Chicago, Florida to as far away as Britain, Germany, Africa and India. The festival screens over 25 films each year. Reel Sisters also provides scholarships to emerging women filmmakers and offers other resources for women filmmakers. 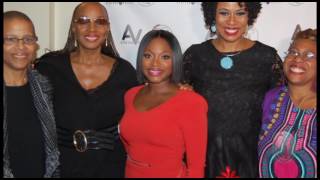 A trailer from Sighted Eyes/Feeling Heart directed by Tracy Heather Strain. Reel Sisters is hosting a special clips and conversation with the director on Sat., Oct. 21 at 7:37