The 21st Global Goddess Artemis Award Ceremony Recently Held at Athens, Greece under auspice of Ministry of Tourism of the Hellenic Republic, Distinguished Leaders from United States Among Honorees

The Global Goddess Artemis Award presented annually to notable women and men leaders from around the globe for their distinguished achievements in the fields of business, politics, academia and the arts, is organized by EAWC.

"This year's program held in Greece provides unique opportunity for prominent leaders to interconnect and exchange ideas on how to move forward on a national and international level." Elena Kountoura

WASHINGTON, DC, and ATHENS, GREECE, October 23, 2017 /24-7PressRelease/ -- Distinguished Leaders from across the globe were recognized at the 21st Global Goddess Artemis Award Ceremony held at the Acropolis Museum in Athens, Greece. The program was under the auspice of and hosted by the Honorable Elena Kountoura, Minister of Tourism of the Hellenic Republic. Distinguished leaders in business, academia, philanthropy, and the arts from across the globe were in attendance.

The 21st Annual Global Goddess Artemis Award Honorees and Distinguished Host, the Honorable Elena Kountoura, Minister of Tourism of the Hellenic Republic stated, "On this occasion I would like, first of all, to applaud Loula Loi Alafoyiannis and all of the EAWC's spectacular work and commitment for more than two decades in the field of strengthening the status of women in leadership positions. Women's contribution is invaluable in the global efforts for strategic alliances that advance innovative change, economic growth and social prosperity, aiming to create a better future for the next generations. This program held in Greece provides a unique opportunity for prominent leaders and prestigious personalities to interconnect and exchange thoughts and ideas on how to move forward on a national and international level. It also marks an open invitation for all participants, to become partakers of the Greek Spirit and culture, as well as ambassadors of the great values of Hellenism and our amazing Country. "

The Honorees from Greece, the United States and from around the world of this prestigious award are:

MIKIS THEODORAKIS
The greatest song writer, composer, politician and activist
The Greek of the World

HONORABLE CAROLYN B. MALONEY
US Congresswoman (D-NY)
The "Bouboulina" of the Greek Americans & Cypriot Americans

KATERINA PANAGOPOULOS
Executive Global National Ambassador of Greece to
The Council of Europe for Sports,
Citizen of Europe for Year 2017
The fearless and daring woman with a can-do attitude & extraordinary achievements

MAURO SERRA
Executive President of A.S. STAR TEAM FOR THE CHILDREN MC
The person with exceptional love and passion for children in need

DR. TERRY NEESE
Founder of the Institute for Economic Empowerment of Women
Her thirst to help Rwandan and Afghani women to receive a degree in Business Administration

MARIA LOIZIDOU
Professor, National Technical University of Athens
Honored by the European Union
For her contribution to environmental issues related to desalination

NATASSA N. SPAGADOROU
Editor-in-Chief of the medical and scientific website "onMed"
Outstanding contributions to the world of print and online media

ANNA BILLIS
Business Owner and Entrepreneur of the Year USA

In a video address shown at the Global Goddess Awards Ceremony, The Honorable U. S. Congresswoman Carolyn Maloney stated to the audience, "I congratulate all of the Honorees of this prestigious award, I also congratulate the Founder, CEO and President of EAWC, Loula Loi Alafoyiannis." The Congresswoman is founder and co-chair of the Hellenic Caucus, which is one of the largest caucuses in the U.S. Congress. She touched on the subject during her speech, "The goal (of the Caucus) is to increase the friendship and cooperation of these two great countries," she said. "A major item on the agenda is the return of the Pantheon Marbles back to Greece and as such I have put in Bill HR51. The Pantheon Marbles were created by Greece, created for Greece, and they belong in Greece." She stated.

The Honorees and Honored Guests were also part of an 8 day cultural program, which included visiting the gorgeous Island of Mykonos, enjoying the luxurious five star Royal Myconian Resort & Villas. Festivities hostd by the Honorable Mayor of Mykonos, Attorney Kostas Koukas who met with the Honored Guests and attended the Celebrations which took place at Nice and Easy Restaurant. Then afterward the trip continued in Athens. The distinguished participants enjoyed the luxury of the five star Hotel St. George Lycabettus Lifestyle Boutique Hotel. They also toured historic landmarks, including the Acropolis and Temple of Poseidon. The Honorees had special visits with prominent leaders; including The Honorable Elena Koutoura, Minister of Tourism of the Hellenic Republic, The Honorable George Patoulis. The Mayor of Amaroussion City and President Central Union of Municipalities of Greece and visited the Greek Parliament.

She thanked the Honorable U.S. Congresswoman Maloney for her support of issues affecting women, children and families and her long stance commitment to public service. Ms. Alafoyiannis then acknowledged and thanked The Honorable Elena Kountoura, Minister of Tourism for the Hellenic Republic for support of the 21st Annual Global Goddess Artemis Symposium & Award Ceremony. She praised her for her leadership and commitment to public service. She then acknowledged The Honorable Katerina P. Panagopoulos, National Ambassador of Greece to the Council of Europe for Sports, Tolerance and Fair Play and Citizen of Europe 2017. Loula thanked her for her friendship of two decades and her long time support of EAWC.

Loula also gave a special thank you to the members of the EAWC Board, including Judy Sheppard and Edie Fraser for their long time support and commitment. Loula highlighted her appreciation to the Mayor of Athens, The Honorable George Kaminis, the Mayor of Amaroussion City and President Central Union of Municipalities of Greece, The Honorable George Patoulis, Mistress of Ceremonies for the 21st Global Goddess Artemis Awards: Emi Livaniou. She also recognized Konstantinos Mastorakis,CEO Know-How, Director Communications Nazzionale Pilote Formula 1, Mr. Thomas Kong, President US-China Cultural Exchange & Development Association, Stamatia Trivoulides, Artist and Board Member of the Women's Museum in Washington DC, Exsekias Trivoulides, artist and sculptor, creator of the Bouboulina award 2017, Television Host and Producer and Co-Founder of startup Doobbear Asimina Tzatha and Producer and Founder of startup Doobbear Konstantinos Gkavelas.

Loula's long list of acknowledgement of Dignitaries, VIPs, Hosts and Honored Guests in the audience for their support of EAWC and whose support helped to make the 21st Annual Global Goddess Artemis Symposium and Award Ceremony possible included;

Elena Kountoura, Minister of Tourism of the Hellenic Republic, Member of Greek Parliament

Father Antonios Papanikolaou, The pioneer of The Ark of the World (Kivotos tou Kosmou) and great philanthropist

George Patoulis, President of Central Union of Municipalities of Greece, Mayor of Amaroussion, President of the Medical Association of Athens, founder of "IATREIO KOINONIKHS APOSTOLIS"

Dr. Elias Foutsis, President of the N.Y. College of Athens

Dr. Nikos Katsaros, Director of the Nutrition and Biomedicine Dep. of N.Y. College of Athens

Dr. Ioannis Panthidas, Vice Director of the I.T. and Engineering Dep. at N.Y. College of Athens

Stamatia Trivoulides, Artist and Board Member of the Women's Museum in Washington DC,

Exsekias Trivoulides, artist and sculptor, creator of the Bouboulina award 2017,

EAWC would like to thank all of its coalition partners, supporters and media partners. The biographies of the Honorees, a media wall with video and photos from the program, and all supporters' acknowledgement may be found at www.eawc.org.

Distinguished leaders from the United States were among the Honorees receiving the prestigious 2017 Global Goddess Artemis Award are:

Dr. Terry Neese, founder and CEO of the Institute for Economic Empowerment of Women, entrepreneur, public policy strategist, women's equality advocate, and award-winning small business owner. Dr. Neese, resides in Oklahoma, has created several non-profit organizations and businesses, she has spent time in Afghanistan mentoring the women there and advocating for their right to equality. Dr. Neese was recognized for her commitment to increasing women's roles in business ownership and shaping public policy.

Ms. Victoria Woods, CEO of ChappelWood Financial Services in Edmond was also recognized for her work in supporting, impacting and empowering women as a wealth management leader. She serves as the Finance Chair for the Oklahoma Commission on the Status of Women and hosts events to raise funds for a variety of charitable organizations.

The dynamic and tireless Loula Loi Alafoyiannis founded EAWC twenty-one years ago. The mission of EAWC is to strengthen the status of women in the global marketplace by building strategies and alliances between women in business and prominent leaders across the United States, Europe, Mexico, Latin America, Asia and many places all over the world. Through EAWC, women of diverse backgrounds and various accomplishments work together to advance women's access to positions of leadership and responsibility. EAWC is helping to pave the way for the further generations of business leaders. 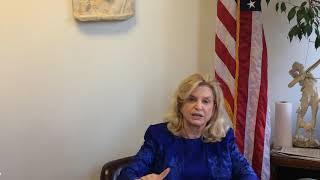