Dog Moms Have Big Concerns About Their Dogs When They Leave For The Day, Study Suggests

According to new research, more than seventy-five percent of American dog moms admit that they worry that their dog will get into trouble, be bored, or have no mental stimulation when they are at work.

The study of 1,300 dog moms found that worrying about their dog can affect their work and personal life. As a result, many take their dog with them as often as possible.

MINNEAPOLIS, MN, April 24, 2018 /24-7PressRelease/ -- According to new research, more than seventy-five percent of American dog moms admit that they worry that their dog will get into trouble, be bored, or have no mental stimulation when they are at work. These results emerged from PetChatz, the first and only digital daycare system for the home alone pet.

The study of 1,300 dog moms found that worrying about their dog can affect their work and personal life. As a result, many take their dog with them as often as possible to avoid the concerns they feel when they leave them at home.
According to the study, six in ten survey-takers said they follow famous pets on social media, so they can find fun things to do when they are home with their dog. Also, seventy percent of dog moms celebrated their dog's birthday with other pets and pet parents, so nobody had to leave their pet home alone.

"Dogs have become family members, and we worry about our family members when we aren't around them," said Lisa Lavin, PetChatz CEO. "We often forget about those lost hours when we are away from our dogs, and it's causing major problems for dog moms."

Do you treat your dog as a member of the family? According to seventy-six percent of respondents, they have their dog sleep in their bed with them which further cements the bond they have. On top of that, 70% of dog moms have bought at least one outfit for their four-legged family member to keep warm or for a cute photo opportunity. Additionally, more than half of dog owners surveyed said that they include their dog in their holiday card because they consider them part of the family.

Our dogs are more than just pets, so it's not surprising that the majority of those surveyed said they'd be interested in a product that can deliver digital pet daycare with two-way video calls, treat dispensing, brain games and aromatherapy.
"Dogs are now a family member, and we must take care of them at all times," said Lavin. "Our goal at PetChatz is to reduce the concerns of dog moms by providing a full day of entertainment, connection, and interaction with digital pet daycare.

PetChatz is part of Anser Innovation, which pioneers IoT technologies that enable 'being there from anywhere'. PetChatz is Anser's first product line with many more to come.

Anser Innovation is based in Minnesota and is borne from a serendipitous collision of invention and entrepreneurialism.

It was founded in part by Dr. Mark Kroll, a former medical technology executive, holder of more than 350 patents and inventor of more medical devices than anyone in the world. Kroll invented PetChatz after realizing the potential for marrying advances in two-way remote communications technology with the unique emotional connection between pet owners and their companions. He considers PetChatz his "most fun" invention.

Lisa Lavin is a former veterinary medicine professional, seasoned business executive, fourth-generation entrepreneur and friend of Dr. Kroll. He shared his PetChatz patents with Lisa one day. She immediately realized the consumer potential for the device among pet owners, and for multiple categories.

In February of 2011, Lisa Lavin, Mark Kroll and Braden Kroll, a high tech investor and business leader, founded Anser Innovation. Since then, Anser has developed a platform of products that enhance remote interaction and has been recognized by industry leaders for innovation and business strategy. 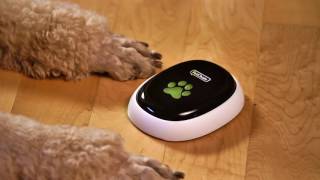