TOPANGA, CA, May 11, 2018 /24-7PressRelease/ -- Celebrating 45 years, Topanga Days remains a quintessential Southern California experience. Part music festival and part hometown fair, this three-day family-friendly event includes: musical acts on two stages, contests, games, a Fun Zone, local artisans and vendors, food and the unconventional and totally amusing Memorial Day parade. 100% of the proceeds benefit the Topanga Community Center (TCC), a 501c3 and one of the last remaining community houses managed by volunteers in California. This year's musical headliners are all bands formed in Los Angeles, and include Milo Greene on Saturday, May 26th at 5:30 p.m., X on Sunday, May 27th, at 5:30 p.m., and Breakestra on Sunday, May 28th at 4 p.m., all on the main stage. The 2018 lineup stays true to the event's original roots by offering a fresh new slate of acts including: Afroliscious, FNTN, Mestizo Beat, Pearl Aday, Backseat Pilots, Pacific Range, Watcher Moon and Venice, a Topanga Days mainstay, will return once again as well as Kummerspeck with a tribute to Tom Petty, to keep the party going. A second stage, known as "The Corral" will feature great bands like Andy & Renee with Hard Rain as well as many others.

Popular with children and adults alike, the contests and games are a highlight of the weekend. The Egg Toss, Three-Legged Race, Baby Derby, Bubble Gum Blowing and Pie Eating are among the weekend's many contests that make for unparalleled excitement. Not to forget, the ever popular Fun Zone, with bounce houses, face painting and new this year, a dunk tank to entertain all ages.

Another high point of the weekend is the feel-good Topanga Days Memorial Day Parade on Monday morning, May 28th.  The community's creativity and vibrant personality is magnificently displayed through an array of original floats that capture the bohemian frivolity and fun that are the essence of Topanga Days. This year's Grand Marshal is Jason Mamoa, the actor best known for Game of Thrones, Stargate: Atlantis and Justice League; he will lead the parade of dancing, prancing and singing in tribute to and remembrance of those in the armed forces, who gave their lives for our country.  The parade ends at the entrance of the Topanga Community Center, where the festival continues with a flag raising ceremony honoring members of the military and the singing of the National Anthem by eleven year old Aurora Finetti, a Topanga local.  All members of the armed forces, past and present, with military I.D., receive free entrance to the Festival on Monday, May 28th.

Food fare ranges from BBQ and Pizza to Mexican and Thai Vegan, with old-fashioned Kettle Corn, funnel cakes, ice cream, smoothies and much more. There will be beer, wine and the TCC's popular sangria bar.

Parking is available on the street with a free shuttle service. Limited handicapped parking is provided on the Community House grounds. Only service animals with appropriate and current papers, wearing vests, are allowed.

X formed over 40 years ago in Los Angeles and was part of the first wave of American punk; becoming legendary leaders of a punk generation.  X's first two studio albums, Los Angeles and Wild Gift are ranked by Rolling Stone among the top 500 greatest albums of all time.  Songs written during the group's inception are as relevant and inventive today as they were in 1977.

Topanga Days was founded in 1973 by actors, writers, artists, musicians, and nature-lovers who called Topanga Canyon home. The event began as a grassroots fundraiser to support the Topanga Community House. Today, residents remain a mix of artists, families, professionals and free spirits. Music aficionados, ranging from Millennials to Boomers, flock to the annual event nestled in the Santa Monica Mountains to enjoy art and craft booths, belly dancing, and more than 25 musical acts performing on two stages over three days. With plenty of activities for kids—from creative face painting to a Kids' Zone with various games, a playground, giant slide, and bounce house—this event makes for the perfect family outing. 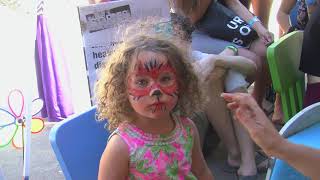