I have been directing films since 1980 and only those individuals with great tenacity, perseverance, and talent achieve recognition. I believe such an individual is Boris Acosta. Armand Mastroianni

SAN DIEGO, CA, May 12, 2018 /24-7PressRelease/ -- Finally, the world will be able to see the complete and extraordinary story written by Dante Alighieri in his literary masterpiece, The Divine Comedy - Dante's Inferno, Purgatory and Paradise. Inferno by Dante is the first slate of a vibrant and historic documentary trilogy. Not until now, has this story been told so descriptively by visual art from artists of the highest caliber and an array of celebrities and known scholars from Italy, UK, US and The Vatican .

Dante's Inferno documentary, produced and directed by Boris Acosta, is a compelling four-quadrant film presented as a visual and narrative journey to Inferno. It is told by narrated by 30 celebrities, scholars and artists from Italy, the United States, the UK and The Vatican. It features Oscar and Golden Globe nominee Eric Roberts, Golden Globe nominee Jeff Conaway, Vincent Spano, Nia Peeples, Italian Legends Franco Nero (Golden Globe and David di Donatello winner), Arnoldo Foà, and Monsignor Marco Frisina, to mention a few. Hell is a rare and unique film featuring an amazing international cast of known celebrities. Screening on May 16th in the Gray 4 theater at 8pm - Press Allowed. Click here to watch the complete Cast trailer.

Both the film and the exclusively-created art collection took 10 years to make. The Infernal story is presented circle-by-circle in an unprecedented and unique way that no other film has done in history, leaving no stone unturned. Virgil guides and protects Dante on his dark journey to Hell, descending circle-by-circle, and its subdivisions to the center of the Earth, and out into Purgatory (2nd sequel). Dante's Inferno is the story of Dante's own journey through the first and worst part of the afterlife, Hell. The Divine Comedy trilogy is the greatest love story ever written. It is about the one man who went through worst of the afterlife to consummate his love relationship at the Gates of Paradise (3rd sequel).

Dante's Inferno is not only based on one of the greatest stories of all time, but also on Boris Acosta's revolutionary and thought-provoking thesis titled "Dante's Inferno Decoded", which offers a new real vision of what Hell may be like and how it actually could exist in a hollow Earth. The trilogy is a set of inspiring films that answers all humans' basic questions. The original Dante's Inferno story has a built-in fan-base only rivaled by The Bible with 60 million people in Italy alone! Click here to watch Inferno by Dante preview (long trailer).

Director Armand Mastroianni said: "I have been directing films since 1980 and during that time I've had the pleasure of meeting many interesting people, including Tom Hanks, who I directed. All share the same desire to express their talent in some way. Only those individuals with great tenacity, perseverance, and talent achieve recognition. I believe such an individual is Boris Acosta."

Gotimna Pictures and Dante Coin present a historic documentary trilogy based on The Divine Comedy - Inferno, Purgatory and Paradise. Mr. Acosta has devoted ten years to the realization of this work, with a dedication truly admirable, and has scheduled the release of the two sequel documentaries dedicated to the exploration of Dante's Purgatory and Dante's Paradise in 2020 and 2021 respectively.

Mr. Acosta was invited to screen two of his previous films, "Dante's Inferno - Abandon All Hope", and "Dante's Hell Animated" at UCLA (University of California, Los Angeles) and later at the Italian Cultural Institute in Los Angeles where reservations exceeded its capacity. Afterwards, he and his films received rave press reviews by L'Italo Americano and other media.

Feel free to email us for an interview with Boris Acosta and the cast. Thanks for reading! 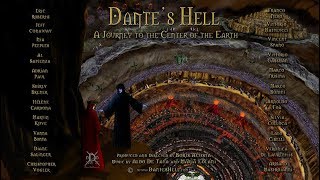 Inferno By Dante - Cast Trailer. A slide show of every single speaker in the film.