"Light is a universal symbol of wisdom and tolerance," expressed Rabbi Shalom Stambler, the longtime Chabad rabbi in Poland who has orchestrated the candlelighting ceremony in the Sejm for the past 13 years, turning Hanukkah in the Sejm into something of a tradition. "Specifically in a country as Poland, there is great significance to lighting Hanukkah candles here in Parliament. Whereas all of Europe is afflicted with anti-Semitism, and Jews throughout the continent are compelled to conceal their Jewish identity, there is great meaning and unity when senior government officials and rabbis perform this ceremony together and garner nationwide approval."

Israel's Chief Rabbi David Lau, who was given the honor of lighting the menorah, shared emotionally, "For me, this constitutes a unique closing of circles. Most of my family perished on this country's soil, but today I am illuminating the darkness with these Hanukkah candles and thus perpetuating our glowing Jewish heritage."

Lau's father and predecessor former Chief Rabbi Yisrael Meir Lau was born in June 1937 in Piotrków Trybunalski in south Poland, a scion of an unbroken chain of 38 generations of famous rabbis.

The senior Lau's father and brother were deported along with the majority of Jews in their Polish town to the Treblinka extermination camp in 1942, where they all perished, while he, his mother and another brother managed to escape. In November 1944, they were rounded up again, and this time, he was separated from his mother and imprisoned in the Nazi slave labor camp in Częstochowa at the age of seven. From there, they were deported to the Buchenwald extermination camp. Lau attributes his miraculous survival to the heroic efforts of his older brother Naftali, as well as a Russian teen by the name of Fedor Mikhailichenko who took the boy under his wing and saved his life.

"It is extremely meaningful to be lighting the menorah here in Warsaw, on the soil where the Nazis tried to exterminate us all," he concluded emotionally.

The Jewish Festival of Lights is being celebrated in a variety of locales and frameworks throughout the eight-day holiday. The highlight is a gala Hanukkah extravaganza in the Jewish Museum of Warsaw that will be attended by some 500 community members and feature Israeli performing artist and musician Dudu Fischer. 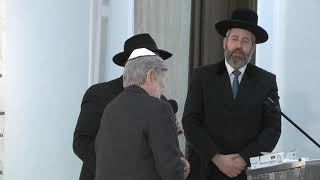