A Used Car Dealer Becomes an Unlikely Hero to a Customer Who Was Carjacked at Gun Point in Charlotte, North Carolina

In an Industry Where Used Car Dealers Seem to Carry Such a Bad Rep, KIPLIN Automotive Steps Up to the Plate & Helps a Customer in Distress Find Her Stolen Car.

"It was absolutely surprising," Charles said. "We were just happy to help a KIPLIN customer. At Kiplin we are all about family and I new that this customer needed her car back ASAP."

CHARLOTTE, NC, May 01, 2019 /24-7PressRelease/ -- After a woman was carjacked at gunpoint at an uptown Charlotte gas station, the staff at the local dealership where she purchased her car went through great lengths to help track down her stolen car, which was nearly 100 miles away.

The victim, a Kiplin Auto Customer, told the Charlotte-Mecklenburg Police Department that she ran into a Mobil station on West Trade Street just before midnight Sunday to pay for her gas. She left her car running because a friend was sitting inside in the passenger seat. A man reportedly forced her friend out at gunpoint and stole the vehicle.

"This morning I turned on WSOC and saw a small blip on the news about a carjacking involving a Malibu. We sell tons of those type of cars and I was praying it was not one of our customers," said James Charles, General Manager at Kiplin Auto.

The registered owner of the vehicle called the dealership on Monday in the early afternoon to ask if they could help track down her stolen vehicle with GPS technology.

She said "she'd been carjacked," and I thought, 'Oh my gosh, that's what I saw this morning on WSOC News,'" Charles said.

Staff at the dealership on Brookshire Boulevard quickly logged onto the tracking system and saw that the car was in Columbia, South Carolina, which was 92 miles from where it was stolen.

At the request of the customer staff immediately called CMPD.

However, they just said, "We can't help you. You have to call Columbia, SC" Charles said.

The staff then contacted the police in Columbia SC in a three-way call with the customer.

The officers asked if we could describe the stolen car and we told them, 'Just look for the KIPLIN sticker," Charles said.

Columbia police spotted the Kiplin Auto Sticker on the car and said the driver led them on a chase before crashing into a brick mailbox at a senior citizen's home.

"It was absolutely surprising," Charles said. "We were just happy to hear that no one was hurt and to be able to help a KIPLIN customer . At Kiplin we are all about family and I new that this customer needed her car back ASAP."

The woman who owns the car did not want to be interviewed but told Eyewitness News anchor, Liz Foster, on the phone that she's thankful she and her friend were not hurt & she is a Kiplin customer for Life.

Staff at the dealership told Channel 9 that some lenders require a GPS tracker on a vehicle as an anti-theft device, as well as asset protection for their asset. They said customers who buy a car with it, sign paperwork to confirm they know it's there.

Kiplin Auto is a used car dealer in Charlotte NC. They provide quality cars starting at $1,000.00 down. Customers are required to provide proof documents to accompany their credit application. Supporting documents include a minimum of 2 pay stubs, proof of residence in the form of recent mail or utility bill, a copy of the drivers licence or state ID, and a completed application online application here for approval. 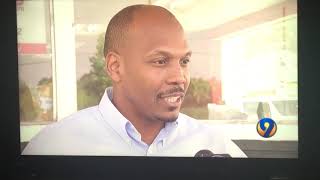