Japanese Diplomat Chiune Sugihara, the Savior of Thousands of Jews during the Holocaust, was Honored in Belarus

The guest of honor at the event was Nobuki Sugihara, the son of the noted Righteous Among the Nations. The event was a central feature of the Limmud FSU annual festival in Belarus, attended by some 600 young Jewish participants.

MINSK, BELARUS, May 05, 2019 /24-7PressRelease/ -- On Holocaust Memorial Day, an official celebratory event organized by Limmud FSU was held in honor of Chiune Sugihara (1900-1986), the Japanese consul in Kovno during the war. The event was a central feature of the Limmud FSU annual festival in Belarus, attended by some 600 young Jewish participants. The guest of honor at the event was Nobuki Sugihara, the son of the noted Righteous Among the Nations.

Despite the great personal dangers involved, Sugihara issued thousands of entry permits to Japan to Jews in Poland and Lithuania, including most of the students and teaching staff at the famed Mir Yeshiva. Following the war, thanks to Sugihara's actions, his rescuers founded a new Mir Yeshiva in Jerusalem and in New York.

The central feature of the event was the dedication of a memorial plaque to Sugihara who, after the war, was granted by Yad Vashem, the title of "Righteous of the Nations." The plaque was installed on the historic building of the Yeshiva with the participation of Nobuki Sugihara, the son of Chiune Sugihara.

He said during the ceremony that when he asked his father why he had chosen to save the Jews, and if he known them previously, he replied that he had not. "My father told me that the only thing that guided him was a deep desire to help and save anyone whom he could," "He knew they had nowhere to go, and that no one else was going to help them to survive. He said, 'People simply came to ask me for help and I just did it.' " The son added, "I am sure that my father is with us here today in spirit and would certainly be very excited by the fact that so many people have come to honor his memory."

Among the participants were Israel's ambassador to Belarus, Alon Shoham; Japan's ambassador to Belarus, Hiroki Tokunaga;, the city's chief rabbi, Rabbi Shneur Deutsch; founder of Limmud FSU Chaim Chesler; the head of the Jewish community in Belarus, Vladimir Chernitsky; the ambassadors of Austria, Switzerland, the United Kingdom, the European Union as well as the Deputy Ambassador of the United States, Head of Nativ for the Russian Federation, Belarus and the Baltic countries, Yana Agmon; and Mir district Deputy Governor, Ruslan Abramchik.

Local residents who wanted to participate in the event received special permission to be absent from work, as did many of the students from the schools in the area who came especially to take part in the ceremony. The event was made possible thanks to the support of the Genesis Philanthropy Group (GPG) and the Jewish businessman Leonid Tomchin.

Chaim Chesler, founder of Limmud FSU: "It is a great honor for our organization to pay tribute to Mr. Sugihara, who did the impossible at great risk to himself and his family, and saved thousands of souls during the terrible Holocaust. Sugihara is a symbol of courage and resourcefulness, and I hope that today we will be able to send a message of hope and sharpen the importance of the persistent struggle against anti-Semitism and racism everywhere in the world."

Rabbi Deutsch said: "At this difficult time, when there are manifestations of anti-Semitism across the world, such as the recent terrible shooting incident in San Diego, the message that emerges this morning from Mir is one of hope and peace. We should spread the message of the Righteous Among the Nations Sugihara and his heroic actions to serve us as a beacon in these difficult times." 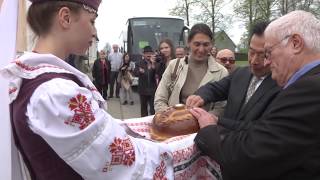 Chiune Sugihara, the savior of thousands of Jews including those of the Mir Yeshiva, was honored in Belarus