MINSK, BELARUS, May 05, 2019 /24-7PressRelease/ -- During the past weekend, a record number of 600 Jewish participants took part in the biggest Jewish event ever to take place in Belarus. The pluralistic volunteer-driven conference arranged by Limmud FSU (former Soviet Union) included more than 150 sessions on a wide range of topics with a multiple selection of activities each hour.

Chaim Chesler said: "It is the second time we have held Limmud FSU in Minsk, and we are truly excited to be a part of this vibrant community with its rich Jewish history." Sandra Cahn, Limmud FSU co-founder added, "Hopefully, we'll continue to grow here, reach new heights, and break records for many years to come."

A central feature of the event was the dedication of a memorial plaque to Chiune Sugihara, the Japanese consul in Kovno during the war, who saved thousands of Jews during the Holocaust, including the students of the Mir Yeshiva, and after the war was granted the title of "Righteous of the Nations." The plaque was installed on the former building of the Yeshiva on Holocaust day with the participation of Nobuki Sugihara, his son, who also gave a lecture on his father in the framework of Limmud.

Another highlight of the event was the opening of an exhibition on the life and work of Yitzhak Shamir the seventh Prime Minister of the State of Israel, who was born in Belarus. Taking part were his children, former Israeli Minister of agriculture Yair Shamir, and daughter, Gilada Diamant, as well as Herzl Makov, Shamir's former director of the office and chair of Menachem Begin Heritage Center in Jerusalem – Limmud FSU's partner in this initiative.
.
One of the conference's participants, Misha Etin (26), said that it's his second time at Limmud FSU Belarus:" It was really worth the wait. Limmud is such an amazing platform, the atmosphere of unity and Jewish learning is really unique and exciting. This is definitely my favorite Jewish event."

Regional director of "Nativ" in Russia and Belarus, Yana Agmon: "Nativ is happy to support Israeli content in the programs of Limmud FSU events and together, to instill values incorporating Zionism, Jewish identity and a recognition of the Land of Israel in all its aspects. Here in Belarus, Nativ is proud to present children's leadership as developed in Nativ Cultural Center's youth club in Minsk, in its intergenerational aspects and with reference to Nobel Prize winners. I believe that that the wonderful experience that Limmud FSU provides to its participants year after year, will remain in your hearts for a long time to come.

Alon Shoham, Israel's Ambassador to Belarus spoke during the opening event and said:" I'm so delighted to see here at Limmud FSU so many young Jewish adults. They are truly the future of the Jewish community in Belarus."

In the best tradition of Limmud, the event was made possible by its team of local leaders and volunteers, led by Limmud FSU Executive Director Roman Kogan and the Project Manager Galina Rybnikova, volunteers Viktoria Brumina (chair of the organizing committee), Yelena Kulevnich, Irina Fridman, Tatyana Shteinbuk, Alexander Furs and others. 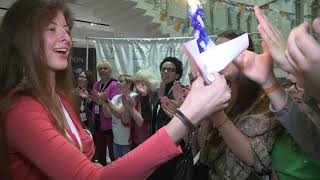