The Shalva Band, including two lead vocalists who are blind and percussionists with Down syndrome and Williams syndrom, stole the hearts of viewers around the world at the Eurovision Semifinal.

TEL AVIV, ISRAEL, May 20, 2019 /24-7PressRelease/ -- The celebrated Israeli Shalva Band performed as guest artists at the Eurovision Semifinals on Thursday evening, bringing the international audience to their feet with roaring applause and not a dry eye left in the theater. The band was introduced as, "One of the most beloved musical acts in Israel," due to their inspiring messages of inclusion, their exemplary representation of the human spirit, and mostly because of their talented music. The band's performance was followed by a media buzz that rapidly spread across the globe, with Eurovision fans and media networks around the world sharing their praise of the band and even inviting them for performances.

The Shalva Band is comprised of eight talented musicians and vocalists with disabilities who began their journey at the Shalva National Center in Jerusalem. Rising to national stardom through the "Rising Star" television show, the Shalva Band gave up their potential spot to represent Israel as a competitor at the Eurovision Song Competition due to the performance taking place on the Sabbath. Yet, on Thursday evening they were granted their well-deserved spot on the Eurovision stage as guest artists. "We dreamt together and here we are on the biggest stage we could imagine. Don't stop dreaming, no matter what people say," Dina Samteh, Shalva Band vocalist, addressed the audience in her message prior to the band's rendition of "A Million Dreams" from The Greatest Showman. 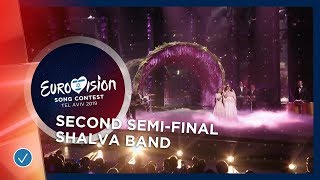