A new position paper by the Global Commission on Drug Policy

Despite decades of States punishing consumption, the demand for and supply of drugs has not been reduced. Incarceration is the epitome of the human cost of these failed policies.

STOCKHOLM, SWEDEN, June 13, 2019 /24-7PressRelease/ -- The Global Commission on Drug Policy today releases Drug Policy and Deprivation of Liberty, a position paper focusing on the "perfect storm" created by current drug policies, incarceration, prison overcrowding and inadequate health care for people who use drugs. Detention fuels the spread of infectious diseases, exacerbates problems of reintegration, and results in a loss of dignity for millions around the world.

Over the past 20 years, prison populations have increased worldwide leading to prison overcrowding in many countries. Current drug laws have contributed to this situation significantly: out of the estimated 10 million people incarcerated worldwide, one in five is incarcerated for a drug-related offense – and more than 80% of these for drug possession alone.

"Prison is the most glaring expression of the failures of prohibition-based drug policies," said Ruth Dreifuss, Chair of the Global Commission, who received the 2019 Stockholm prize in Criminology on the 11th of June for her role in introducing heroin-assisted treatment when she was Minister in charge of public health. "Despite decades of States punishing consumption, the demand for and supply of drugs has not been reduced. Incarceration is the epitome of the human cost of these failed policies. In our view, deprivation of liberty is the wrong response to drug use."

To remedy this situation causing avoidable suffering for millions, the Global Commission calls on States to end prison overcrowding and to ensure that all inmates, including people who use drugs, receive primary health care at the same level as the general population, with special attention to harm reduction measures. All practices that violate human rights of people deprived of liberty must be forbidden. States should end disproportionate sentencing, including the removal of all penalties for drug possession for personal use.

The Global Commission on Drug Policy is an independent body comprising 26 members, including 14 former heads of state or government and four Nobel Prize laureates. Its purpose is to bring to the international level an informed, evidence-based discussion about humane and effective ways to reduce the harms caused by drugs and drug control policies to people and societies. 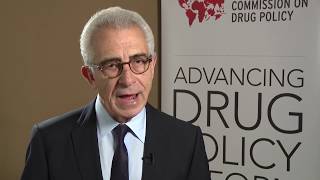 Former heads of State and former UN SecGen Kofi Annan present the positions of the Global Commission on Drug Policy, advocating for the responsible legal regulation of drugs.