A national celebration of refugee talents, stories, and accomplishments

WASHINGTON DC, June 25, 2019 /24-7PressRelease/ -- One Journey recognizes the talents and resilience of refugees and displaced people throughout the world. We encourage communities to embrace those who have fled violence and persecution, in search of secure homes and brighter futures for themselves and their families. On June 29th, One Journey Festival returns to Washington, DC to celebrate how far they have come, on so many diverse paths, through a day-long event packed with art, food, music, dance, technology, and inspiring stories.

"The One Journey team has assembled an amazing lineup of singers, musicians, dancers, and speakers for the mainstage," says co-founder Wendy Chan. "They are refugees and immigrants from countries around the world. For many, their journeys and the hardships they have survived are the heart and soul of their creative lives."

The Festival is set to take place on the grounds of the National Cathedral from 11am to 6pm. The festival is free, family-friendly, and will happen, rain or shine. Three stages of packed performances will entertain and inspire festival goers, along with an international marketplace, immersive VR experiences, a take action tent, and family-friendly activities. More than 5,000 attendees are expected to attend.

Speakers/Storytellers
•Emi Mahmoud – Refugee from Sudan, acclaimed slam poet, activist, UN Goodwill Ambassador, and tireless advocate for refugees. "When your very existence is an act of defiance, live."
•Jay Abdo – A huge movie and TV star in the Middle East, Abdo fled Syria as a refugee, now he's rebuilding his career in movies with Tom Hanks and Nicole Kidman
•Karagöz Shadow Theater – Traditional Turkish shadow puppetry. Broadway-bound, Karagöz brings the magic of the "dream curtain" to the world
•Convergence Theatre – Powerful vignettes from "A New Nation" amplify the voices of immigrants and refugees to "challenge fear and strengthen our sense of home"

Many of the mainstage performers will share their stories with Festival goers on the One Journey Story Stage. Several styles of dance will also be taught throughout the day at the Studio Stage.

About One Journey. One Journey is a grassroots alliance working to counter anti-refugee sentiment by shifting the narrative about refugees worldwide. We combat hate and fear by celebrating the talents and contributions of newcomers, reminding America of its own migrant roots, and connecting the public to organizations on the front lines of actively supporting refugees. We strive to build enduring allies for refugees and use cultural and technological tools to facilitate human connections between refugees and their host communities. 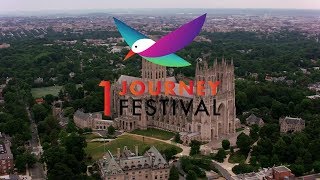