Rare 1911 pistols made from a 4.5-billion-year-old meteorite will be sold at auction this July by Heritage Auctions.

SAN JOSE, CA, July 16, 2019 /24-7PressRelease/ -- Rare 1911 pistols made from a 4.5-billion-year-old meteorite will be sold at auction this July by Heritage Auctions. The opening bid is priced at $900,000 for the set of two. The oldest meteorite in the world has been machined into the most famous pistol on earth. It is considered a work of art and a collector's dream.

According to Heritage, the world's largest collectibles auctioneer, the rare set of pistols raises the limits of what can be accomplished in gun design to a cosmic level.

The meteorite handguns are fashioned from the Swedish Muonionalusta Meteorite. The set of 1911 pistols have been test fired by Lou Biondo of Business End Customs, considered to be one of the finest 1911 gunsmiths in the world. A set like this one has never been sold previously.

Heritage Auctions describes the offering on their website in link below:

Here is an excerpt from their description:

This offering is literally a true 'one-of-a-kind' and represents an incredible combination of meteorite and firearms. Presented here is a set of two Model 1911 type pistols made from the Muonionalusta Meteorite which fell in Sweden. Both right-handed guns, one is a GI Model, and the other is a Custom Model. Both pistols were made by noted gunsmith Lou Biondo of Business End Customs, and each gun has test fired using 35 rounds.

The Muonionalusta Meteorite was first discovered in Sweden in 1906 but likely fell about 1 million years ago and is thought to be one of the oldest meteorites dating to some 4.5 billion years. The world-famous Iron features an amazing Widmanstätten pattern when etched that makes the pistols so visually striking. Obviously, a significant amount of meteorite was required as the "raw material" for this cool enterprise.

This is a gun for the ages, and this set made of meteorite is ageless. 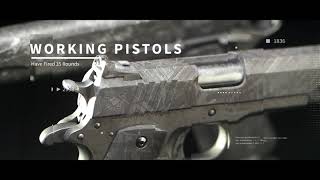