The show featured fashion, musical performances, and a $20,000 custom gown donation to Chances for Children and The Animal Fund

"Think of it as a musical fashion show," said Napolitano. "Most people are not aware that I have choreographed for over 20 years."

'Mademoiselle French Collection THE SHOW' made its global debut in April 2019 at a charity gala attended by Monaco's wealthiest elite. It featured an electrified atmosphere with fashion, professional performers, actors, and singers. The featured fashion was Napolitano's own haute couture from her Mademoiselle French Collection, including items recently-added to the luxury collection.

While well-known for creating jaw-dropping designs like the ones featured onstage in Monaco this spring, Napolitano showcased some of her lesser-known talents to the world at the recent show.

"Think of it as a musical fashion show," said Napolitano. "Most people are not aware that I have choreographed for over 20 years."

The glitzy show featured professional actresses and singers Emily Flosi and Sofia Gonzalez performing songs written and choreographed by Napolitano. All onstage fashion was available for purchase by those who found themselves enamored. The Mademoiselle French Collection's new fragrance, French Riviera No. 1, was unveiled during the show, and guests got a close-up look at the collection's masterpiece makeup and skincare products.

The April 2019 debut of 'Mademoiselle French Collection THE SHOW' was a massive success and Napolitano used the event to give back to the community. She closed the show with a special gift - a $20,000 custom gown donated to Chances for Children and The Animal Fund charities.

The show, not soon to be forgotten by those in attendance, will be taking to the stage in the United States, Europe, and Hawaii, beginning in 2020. 'Mademoiselle French Collection THE SHOW' can be booked for luxury events at a starting price of $10,000 USD per show.

More information can be found at http://www.vnsn.tv 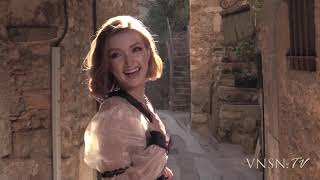