LEMONT, IL, September 11, 2019 /24-7PressRelease/ -- Among those many beautiful and talented people from throughout the United States, Europe, Asia and Canada were also the Talent from MODEL ACT STUDIOS SCHAUMBURG & LEMONT, IL, who gathered in New York 2019 for the semi-annual International Modeling and Talent Association's event. IMTA is an organization comprised of leading modeling/talent training centers and agencies engaged in the professional promotion of the fashion and talent industry.

More than 200 top fashion and talent agents, casting directors and industry professionals participated as judges and scouts in the action-packed, week-long, international event. Men, women and children of all ages competed on the modeling runway in high fashion, casual wear and swimwear while actors performed monologues, cold reads, entertainment host and sitcom scenes, and TV commercials. Singers and dancers were showcased, and all participants attended educational workshops and seminars presented by industry experts.

The exciting week culminated with many of the top awards going to the MODEL ACT STUDIOS SCHAUMBURG & Lemont , IL at which the agents, educational institutions and VIP's in attendance presented competition winners with trophies, cash prizes and scholarships for outstanding performances.

Agents from the USA, Milan, Paris, London, Hamburg, Munich and Tokyo were present and searching for new stars. These agents and managers were particularly impressed with the quality of talent coming from the MODEL ACT STUDIOS SCHAUMBURG & Lemont., IL, which received a 100% callback success rate.

Model Act Studios is the only Talent Management studio in Schaumburg & Lemont Illinois that works directly with talent agencies, modeling agencies, and casting directors from Los Angeles, New York, and Chicago. Just as important as having the correct tools to succeed, such as confidence, interview skills, camera technique, acting ability and experience, is the opportunity to meet the right people.

Congrats these Amazing Actors and Models at Model Act Studios!

THIS IS WHAT WE DO
Robert Masny (President of Model Act Studios ) is a veteran of the industry with over fifteen years of experience. After earning his Bachelor of Arts degree in Management of the Arts from Columbia College, he spent over 9 years as the Executive Director of the top modeling and acting company in Illinois. At that point in his career, he decided to branch out on his own and make his visions for you a reality. As a family man, a loving husband and a loving father to his five year old daughter and his four year old son, he is ready and willing to put others before himself in the quest to gain them the happiness they deserve.

Happiness for the gains of others is something Robert shines with. Whether it's a role in a hit sitcom, a shy person becoming confident during auditions, or a print ad for Kohls, Robert lights up when he has the opportunity to speak of those that he has had the opportunity to help grow and develop. Robert channels his passion for the success of others easily into his relationships with his clients and this is a noticeable attribute of his agency. His positive relationships with his clients and their support teams are, as he would say, "what bring me back day after day."

Robert Masny vision is to develop your talent while helping you to grow, both as a person and professionally, help you to become a more confident person, and to find you the success you are looking for. He has personally discovered numerous actors, actresses, and models, who have appeared in commercials, print ads, television shows, and movies. Throughout his career he has created strong relationships with casting directors both in the Chicagoland area and throughout the entire country. Through IMTA he has built strong working relationships with top NY and LA agents and managers who work with Nickelodeon, Disney, ABC Family, etc. These relationships help Robert to market his talent directly and create those success stories that he loves to share!

Sabrina DiGiovanni
abrina has been working in the entertainment industry 10 plus years. Sabrina trained and studied Theatre Arts at Waubonsee Community College and is a Certified Makeup Artist obtaining certifications from London Eyes International Makeup Academy.

Sabrina is agency represented by five talent agents in Chicago and has worked on many projects regarding, live TV, print advertisements, trade shows, commercials and more. She is one of the faces of WeatherTech, is in Grouon's latest Cash Back commercial, and has worked on shows like Empire and Chicago Med. You can see Sabrina as a States Attorney Investigator in NBC's newest show Chicago Justice.

Kelly Maier
Kelly has been in the business for over 15 years. She is a proud member of Actors Equity Association. Kelly has performed all over this country playing leading roles on the Musical Theatre stage as well as performing in front of a camera. She has lived and performed in New York, Los Angeles and Chicago. She recently stared in an infomercial for Avid Dental. She has a BFA in Acting from The Chicago College of Performing Arts.

Some of her favorite stage roles include, Dorothy in "The Wizard of Oz", Audrey in "The Little Shop of Horrors", Ado Annie in "Oklahoma", and Sandy in "Grease". Kelly is currently touring this wonderful country performing in a live Gameshow alongside Hollywood Legend, Bob Eubanks from "The Newlywed Game". 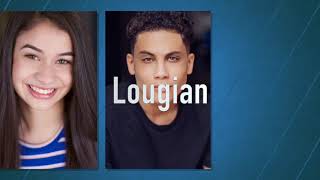