The band combined the new track with a gritty self-produced music video.

With their latest single "Fading Slowly" LACKLUSTRE has captured the tonal quality of some of Rock's most legendary acts, while focusing their song and lyric writing on memorable hooks and melodies.

With their latest single "Fading Slowly" LACKLUSTRE has captured the tonal quality of some of Rock's most legendary acts, while focusing their song and lyric writing on memorable hooks and melodies that today's TOP 40-trained ears will find it difficult to shun as simple "classic rock". The fact is, the song is good and it has set the band on a yet uncharted path.

"Our focus has never been on following all of the traditional steps to "make it" as a band. What we're trying to do here is record a song or two that go down in the history of Canadian music as great songs. In 2019 there are so many ways for new music to be discovered, with the right song in your arsenal we believe we can get where we're going on song-power alone."—Kyle Hosick, Guitarist.

The new single was recorded at Oakville, Ontario's River16 Recording Studios and was engineered by Steve Kirstein. With the help of legendary producer and mixer Ron Nevison (who's mixing credits include Led Zeppelin, Heart, The Who and Bad Company) the band has taken their sound to a new level. Put it this way—if the artist/sponsorship folks at Gibson and Marshall don't wind up calling this band something is wrong in the universe.

The band combined the new track with a gritty self-produced music video that has just gone live this week and does the huge wall-of-sound heard within the track justice as visual accompaniment.

LackLustre may seem like an odd name for a band. One that specifically calls you out as being average or middle of the road? "Because we don't care about the formula most bands follow we really didn't care what our name was. Our sound is not polished and our image was not carefully crafted. So basically we are LackLustre." Hosick added.

The band's focus has been on capturing the rock essence of their songs by looking to their musical roots–rock acts of the 70s and 80s.

The musicians that make up the band have been around the block. In their early 40s, LACKLUSTRE is not looking to make a name for themselves based on looks alone. This is about the sound and the songs.

Not only does the band look to the pioneers of rock for inspiration, but they've also adapted playing techniques and individual sounds that will take listeners right back to that era of music. It's the era of music the band loves most.

The band will be performing at Today/Tonight Bar in Toronto on Oct 5th, 2019.

LACKLUSTRE is a Toronto-based 4-piece rock band with a sound that dig up rocks roots and buries the notion that true rock 'n roll is dead. 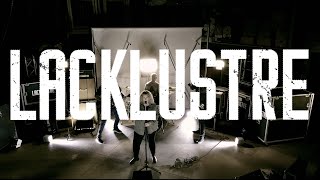