BOOK+APP, Learning Can Be Magic, Launched on Kickstarter

BOOK+APP boldly announces its first launch of a crowdfunding campaign on Kickstarter to help put an end to fight child smartphone addiction, that growing in the digital era now.

BOOK+APP, our Augmented Reality (AR) technology that's driving digital education and virtualization for children. It creates magical new experiences by combining mobile devices and paper books. "We confidently guarantee that BOOK+APP is the world's best AR educational tool and it's the result of my know-how integration." Said Victoria Han, Founder of Victoria Productions. "Since was founded, we have published about 150 books and 600 apps, related to children's education."

For the Kickstarter campaign, Victoria Production brings specifically Tagme3D word cards and AR TOTO Book series with lightning-fast AR recognition tech in multiple languages. Tagme3D card set comes with a video pen. This collection contains 400 vocab cards to help young children learning language skills; reading, writing and speaking. AR TOTO Book series, composed of 40 books, enables children to have more experiences. The book stories have been shown as amazing 2D animations on the screen of your mobile devices. It reads any page of these interactive books. Besides, parents can personalize books as bedtime stories for their children by voice-recording feature.

The rise of the new education and learning world has begun with investment by 2020 and EdTech has been more accurate and become one of the hottest topics of discussion among parents and educators around the world. Also, BOOK+APP has served as a magical learning tool to meet the demands of the times and is now entering a new era of education.

BOOK+APP by Victoria Production will first launch on a crowdfunding platform Kickstarter on December 10th, 2019. The launch strategy was chosen to test product demand globally. Based on the success of the BOOK+APP crowdfunding campaign, Victoria Production expects to be on the path of distribution EdTech widely. Market research has shown a particular demand among audiences including children, parents and even academic educational associations. The expected MSRP is currently set at $ 350 USD. Now on the campaign page, super early backers can get a reward with 50% discount.

Victoria Han Farago, a founder of Victoria Productions, established in 2005 which has become a driving force in the digital world through the creation of beautifully crafted TV ads, photography and multimedia services. In 2008 Victoria Productions pioneered breakthrough technology in the development of enchanting mobile educational apps, 3D modeling, motion graphics and engaging web platforms for both children EdTech and Digital advertising. 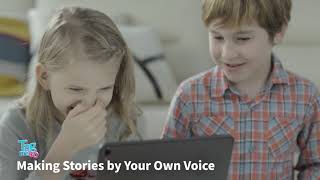