HOUSTON, TX, December 30, 2019 /24-7PressRelease/ -- Devilish deeds of the Protestant Church since the Japanese colonial period are pointed out a political organization masked with religion, the CCK should be permanently shut down

The entire congregation of Shincheonji Church of Jesus said the below in their statement of condemnation released on the 24th, and urged the members of the CCK to leave from it for there is no salvation there.

In their statement, the members of Shincheonji Church of Jesus said, "Pastor Jun spoke against God by saying, 'If you mess around, I will kill you,' and other similar remarks. He has committed the sin of blaspheming God and the Holy Spirit." Shincheonji also emphasized, "Pastor Jun's words are the words of the CCK. The true identity of the spirit (god) over the CCK is finally exposed."

The members of Shincheonji Church of Jesus also said, "It seems that the CCK churches and pastors who are under President Jun Kwang-hoon all have the same spirit (god) and thoughts. Jun Kwang-hoon should leave the earth along with the CCK – or, enter the fiery lake of sulfur voluntarily."

The members of Shincheonji Church of Jesus explained that the atrocious acts of the Protestant churches that belong to the CCK followed the devilish deeds that have been continuing since the Japanese colonial era. They listed the CCK's deeds that are "anti-nation, anti-society, and anti-religion," which include their worshipping and praising the Japanese gods at their shrine, how the CCK pastors added to and subtracted the Book of Revelation, and how there have been 12,000 convictions for the crimes the pastors committed in the past ten years.

The members of Shincheonji Church of Jesus said, "We are afraid that our country – South Korea – will be pointed out and blamed by the whole world as a country of the devil, because of Jun Kwang-hoon, the president of the CCK. The whole world is speaking out against Jun Kwang-hoon's ludicrous and blasphemous comment."

Along with this, the members of Shincheonji urged those who follow Pastor Jun by saying, "Believers who are following blindly – do you think there is salvation in the CCK, an organization that says to "kill God"? Flee from there."

A representative of Shincheonji Church of Jesus said, "President Jun Kwang-hoon claims that he has been anointed, and even asserting that the entire country of South Korea centers around him, and that he will kill God if things do not go his way." He also explained, "Such assertions expose his heretic beliefs that use religion for power and oppose God. The CCK – a political organization masked under religion – must be shut down immediately."

News Heaven is the newspaper company aiming to report the most informative and unbiased news to the world. 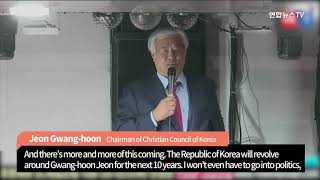