Company is positively disrupting the way the world grows and eats

Virginia Farming is a widely respected agricultural program hosted by Jeff Ishee and Amy Roscher. The program explores innovations, highlights, challenges, and unique stories of interest for the agricultural community in and around the state of Virginia.

According to statistics from 2017, Virginia Farming reaches about 60,000 viewers each month and is distributed throughout 40 counties in Virginia, Maryland, and Washington, D.C. Virginia Farming also airs nationally on RFD-TV.

According to the RFD-TV website: "RFD-TV is the flagship network for Rural Media Group. Launched in December of 2000, RFD-TV is the nation's first 24-hour television network featuring programming focused on the agribusiness, equine and rural lifestyles, along with traditional country music and entertainment." The independent cable channel is available in more than 52 million households and is distributed by many of the top names in national cable and direct television service channel providers.

HYVE® Indoor Farming Systems are complete contained environment agriculture systems that utilize hydroponics to produce large-scale commercial crops in vertical farming applications. HYVE® Systems are designed to provide commercial growers with a means to grow crops in a pesticide and herbicide-free environment. The systems utilize LED grow lighting, advanced automation, fertigation and irrigation techniques, and vertical racking to allow farmers to grow healthy, high-yield crops with accelerated grow cycles that provide an exceptional return on investment for the farmers and fresher supplies of vegetables for merchants and consumers.The systems designed by HYVE® hold great promise in helping farmers meet the challenges of feeding a growing world population while mitigating some of the risks that are more typical in conventional farming.

DASCOM Americas is a diverse technology company with strategic business units focused on the manufacture and marketing of LED lighting, business printing solutions, and indoor vertical farming. The company is located approximately 2 1/2 hours from Washington, D.C.

The company is a wholly-owned subsidiary of Hong Kong-based DASCOM Holdings, a world technology leader doing business in more than 100 countries around the globe. 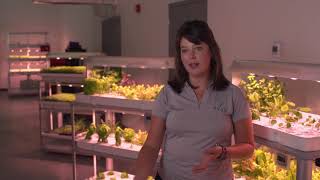 Virginia Farming will feature HYVE Indoor Farming Systems on the next episode.