Kinky Friedman Cigars is back in Production and the new Owner is the only Black Woman in America to have sole proprietorship of a Cigar Company. Kinky Friedman remains Spokesman and Senior Adviser.

"The company will have a more sleek look without losing the Kinky Friedman Texas Charm that made it popular. And the new company slogan, "Become A Legend" says it all," according to Nicole Barrett.

DALLAS, TX, January 14, 2020 -- Kinky Friedman, is known for his Music, Books, Political Satire and his LOVE for Cigars. It made perfect sense to create his own line of Kinky Friedman Signature Cigars, available to be ordered online and in select stores.

Kinky Friedman Cigars is now under Majority ownership of, Nicole Barrett, with Kinky Friedman remaining the Senior Adviser and Spokesman. According to market research, this transaction also makes Nicole Barrett, the only Black Woman in the U.S to be sole proprietor of a Cigar Company. A Dallas Native, Barrett was Host of 'The Nicole Barrett Show' in Dallas/Ft. Worth, and has a background in Entertainment, Politics, and Media Relations.

"Moving forward, the company will have a more sleek look without losing the original Kinky Friedman Texas Charm that made it popular. And the new company slogan, 'Become A Legend' says it all," according to Nicole Barrett. "I would also like to expand to a more diverse consumer base, and of course, our Cigars will be available in Lounges, Restaurants, and Stores across America. Our online E-commerce Orders will continue to be essential."

Each Cigar features a Signature name as unique as it's Founder. The RABBI, is a popular stick, and The WILLIE named after Kinky Friedman's good friend, Willie Nelson, features a twist on the end and is the #1 seller of the Brand. Kinky Friedman Cigars are hand rolled in Nicaragua with mild to medium blends creating a rich smoke.

The 'LADIES FIRST' Series, created by Nicole Barrett, features Petite Premium flavored Cigars preferred by Lady Smokers. The Flavors include: Whiskey ('Steel Magnolia') and Cherry ('The First Lady'), and a variety of others.

"The company needed someone with the right enthusiasm, Social Media skills, and understanding of the market and the Brand, said Friedman. "Nicole has all of that. Along with my knowledge of good Cigars, Nicole can get Kinky Friedman Cigars on every shelf and in every Humidor in America." 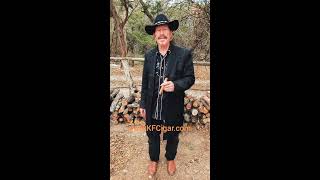