Piano-based Record "Luminary" - Music For Mindfulness, Focus, and Growth - Is Released To The Public

"Wordless vocal effects and enchanting piano tone intermingle with consuming appeal create a wintry aesthetic." "Everyone should proudly own this CD. Highly recommended."

NEW YORK, NY, February 08, 2020 /24-7PressRelease/ -- After two weeks in a half-abandoned mountain town on the Greek island of Crete at an artist residency, Cheryl B. Engelhardt flew home to New York with something special in her pocket… and on her hard drive.

She had over 60 minutes of music that she composed and recorded on a grand piano in a stone room. Engelhardt spent half her time in Greece composing and the other half editing and producing the audio (including reversing the audio of plucked piano strings and a bell, giving the album an electronic/orchestra feel without being synthetic).

The album is called "Luminary" - 10 tracks of six-minute pieces, some piano-only, some piano, voice (hums and breath) officially February 7th, 2020. Engelhardt will be throwing the album's hat into the New Age Grammy ring later in the year.

"Luminary" was Engelhardt's solution to her panic attacks. She had been searching for something to quell the noise in her head, something to keep her present. To meet her where she was, emotionally, and take her on a journey to a more peaceful state of mind. Engelhardt couldn't find such recordings, so she decided to compose them herself.

"Luminary" is Engelhardt's fifth record, the first in the New Age category. The New Yorker received a degree in Biology and in Music from Cornell University, studied orchestration at Juilliard, then began her tenure as a composer for films, ads, theater, and choirs, as well as a touring pop recording artist. Her successes as an independent musician make her a sought-after speaker on music business panels and podcasts. She began an online series of programs called In The Key Of Success (www.inthekeyofsuccess.com) to help other musicians find fulfillment in their creative careers through powerful communication and self-awareness. She lives in the Hudson Valley with her mountain guide husband and basset hound. 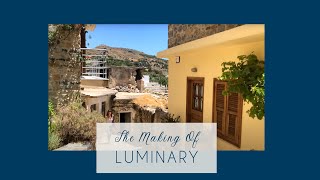 The Behind-The-Scenes of Making "Luminary", a new album of piano/ambient music for focus and peace! Details at www.iamaluminary.com.

Official press release as a PDF.