The single release comes with two remixes, produced by musician and actor Benjamin Patterson (OWN's Greenleaf), which give a distinct feel to each track. On the remix he melds his signature funk style with edm elements for a fast paced sound fueled by the urgency of Shaka's message. The piano mix is a delightfully stripped down version of "Stay Strong" that underscores the gravity of the injustice this defiant piece highlights.

Artwork as strong as all of the tracks complements Shaka Smith's captivating style of rhyme as he offers words of encouragement to those wrongfully incarcerated, while shedding light on some of the issues they face within an unjust justice system. With 20% of proceeds donated to the Innocence Project, Shaka Smith proves that he is more than just talk. He is committed to social justice and meaningful systemic change within the system.

After living with "Stay Strong", it will be apparent to listeners that Shaka Smith is here to be the change in the world he wants to see. Since chasing after his dreams, not only has Shaka Smith held down recurring roles on popular shows like, "Dear White People" and "Modern Family", but has also has steadily built a fanbase of over 250,000 loyal supporters, letting the game know he's here to stay. Check in with "Stay Strong" and the remixes on all digital stream platforms and check in with Hip Hop's up next: Shaka Smith.

As a title holder in physique/bodybuilding competitions (Iron Man Naturally (2x), SF Championships, West Coast Classic, Gold Coast Muscle Classic) Shaka is a recognizable face in health/fitness commercials. Brand influencer collaborations include (Garden of Life, Lakanto, Affirmats Yoga Mats, Oxylent and Antithesis Apparel). Shaka is also an environmental activist as a board member for Project Save Our Surf hosting monthly beach cleanups and a camp which has reached thousands of underserved youth in Southern California and Mexico, educating them on environmental issues with hands-on instruction in yoga and surfing. 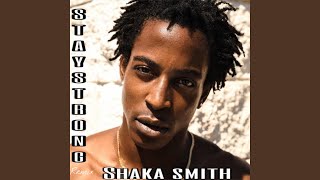