"We want to share the veteran's stories with the world"

PORTLAND, OR, May 16, 2020 /24-7PressRelease/ -- On Wednesday, May 13, 2020 (1:30 PM EST / 10:30 AM PST), "The Bunker Boys Show" premiered as the world's first World War II history talk show. Offering their first 6 episodes free for viewing, the Bunker Boys are a group of top Battlefield Tour Guides in Europe who are collaborating on the project. The aim of the show is to deliver World War II history in a unique and memorable way. Tony Cisneros, Owner and Founder of Alpventures Tours is the Series Host and Executive Producer; along with Co-Host Reg Jans (owner of Battlefield Experience), and special series guests include Paul Woodadge (owner of D-Day Historian / WW2TV), Roland Gaul (co-owner of Gaul's Legacy Tours), and David Harper (co-owner of Eagles Nest Historical Tours). Cisneros says, "We are tour guides with very unique experience, and we want to share what we've learned bringing WWII Veterans back to the battlefield over many years." Series host and special guests will discuss not only World War II history - but the impact the war has made on the world over the last 75 years. Their premiere episode included special guests "Winstan" (Stan Streather - the top Winston Churchill impersonator), along with The Swing Dolls, America's premier Andrews Sisters Tribute. Future episodes will offer plenty of first-hand accounts of World War II as told by the men and women who experienced them. Get full access to the first six episodes as they are released every other wednesday, on their website.

Bunker Boys is a World War II history, entertainment, and travel platform. The production group is made up of the top five World War II Battlefield Tour Guides in Europe. The project is coordinated by Tony Cisneros, owner of Alpventures Tours. Founded in 1997, Alpventures is an industry-leading Tour Operator that specializes in World War II History Tours to Europe and Russia. 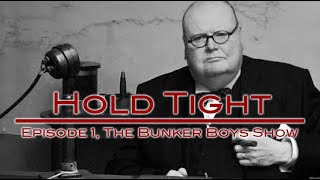