Israel Minister Ze'ev Elkin: "There Is A Window Of Opportunity For Increased Aliya To Israel"

Ze'ev Elkin, Israel minister of higher education and water resources, was speaking to an e-learning audience of Limmud FSU, and interviewed by the organization's president Aaron G. Frenkel.

JERUSALEM, ISRAEL, June 17, 2020 /24-7PressRelease/ -- In a wide-ranging discussion with Aaron G. Frenkel, president of Limmud FSU earlier this week, Ze'ev Elkin, Israel minister of higher education and water resources, who has served in previous governments in a variety of ministerial capacities, including minister for immigration and absorption and Jerusalem affairs, said there was a serious possibility that the second half of 2020 will see a significant increase in the level of Aliya to Israel.

While Limmud FSU generally mounts peer-led, volunteer-based gatherings of Jewish learning that specifically reach out to Russian-speaking Jews around the world from Moscow to the US West Coast, and from Europe to Israel, in a project initiated by Limmud FSU Founder Chaim Chesler, and produced by Limmud FSU Deputy Director Natasha Chechik, since the corona lockdown made physical conferences impossible, Limmud FSU has been providing digital e-learning opportunities on Jewish, general – and coronavirus – topics and discussions with Jewish and Israeli leaders from all walks of life. Sessions have also been arranged by volunteer organizing committees of the festivals. These online gatherings are an opportunity for Russian-speaking Jews to learn – and be – together, virtually. Elkin himself as attended a number of the festivals in recent years as a speaker.

In answer to questions by Frenkel, Elkin touched on Israel's relations with both Russia and Ukraine; the possibility of annexation of part of the West Bank; and Israel's relations with Arab countries such as Saudi Arabia, United Arab Emirates, Qatar, Kuwait within the framework of a coalition to stand up to the threat posed by Iran, Iraq and Syria. "It is no secret that over the past year, Arab countries have come to understand that Iran is a far greater threat to them than Israel, and this makes us a potential partner. There are Arab leaders who are willing to make steps towards peace – but their people are not. They are interested in our high-tech, our cyber industries, our approach to water resources; they see us working strenuously to counter the expansion of Iran's sphere of influence. This will lead to a more open dialogue and warmer relations."

On the issue of immigration to Israel, Elkin reminded the worldwide audience that "Israel is seen as a relatively safe place where both the corona virus and antisemitism are concerned." But he cautioned, there is a difference between thoughts and action. "People don't move in one day, and fewer flights means fewer immigrants." This, he continued, may change in the second part of 2020 and 2021, "for economic crises give people the push to make the difficult decision to move."

When asked by Chesler whether this might impact the number of immigrants from the US as well as the countries of the former Soviet Union, Elkin acknowledged that while in recent years, fully 60 percent of olim (Hebrew term for immigrants to Israel) came from the Russian-speaking Jewish communities of the FSU, in the future "we could see a major wave of aliya from the US" that could include both US Jews and Israelis who have been living there for the past years or decades. The government, he noted, is interested in this becoming a reality and will do everything it can to encourage aliya.

In looking at the reality these new immigrants will face, Elkin turned his attention to Jerusalem. "It is not only a city with an amazing past," he stressed, "It is equally a city for the present and future, and an amazing demographic laboratory. The issues we need to face in Jerusalem today, on such issues as the evolving demographic balance between young and old, we will need to face in the rest of the country 30 years down the road." While Tel Aviv has, for many years already, been seen as one of the world's leaders in high-tech start ups, Elkin said, Jerusalem itself is joining that list. In this, he noted, "Israel is joining only two other countries, USA and China, that have two high-tech centers. The city's successes – and mistakes – make it a unique laboratory. It is a complicated city, but also absolutely fascinating." 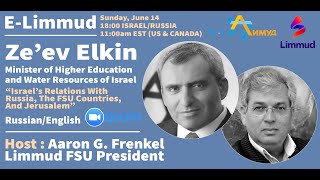