Barbara M. Hardie is an esteemed author and channel for the Angels to deliver their messages. This spiritual connection has not only shaped her body of work, it has also changed her life. Today, she shares the latest transmissions.

While the Coronavirus seems to be the root of the problem, unfortunately, there is much more going on behind the scenes that humanity will learn about in the near future.

TOLLAND, MA, June 18, 2020 /24-7PressRelease/ -- In her own words, Barbara M. Hardie stumbled onto connecting and working with the angels by accident. One night after an extremely stressful day, she went home and reached up to God asking Him for help in finding Inner Peace. So often in moments of frustration like these we "put the word out" and then forget about it; we return to the rigors of daily life and keep moving. However, something unusual happened to Barbara Hardie at that point in her story. She found herself drawn to all things spiritual, specifically those to do with angels. Her thirst for knowledge became harder and harder to quench, as she filled her days with books, meditation and classes. She couldn't get enough!

After three years of communicating with the Angels for her own spiritual improvement and growth the Angels told her it was time to spread the word. The Angels then gifted her with the name Angel Connections for her company in 1995, and the rest is, as they say, history.

Now, though, as America finds itself writing a very different type of history, Barbara Hardie's brand and beliefs are really being put to the test.

"The entire world is going through an evolutionary transition at this particular time," explains Ms. Hardie. "While the Coronavirus seems to be the root of the problem, unfortunately, there is much more going on behind the scenes that humanity will learn about in the near future. President Trump and others have referred to this virus as a war we are fighting with an invisible enemy.  There is truth in that statement as a spiritual war is taking place between Dark and Light forces, and the virus happens to be the weapon of choice."

If you're not familiar with Barbara Hardie's life and work, at this point we wouldn't blame you for thinking, 'Wait a minute, she talks to angels? So, this is literally an Angel Connection!' You'd be absolutely correct to deduce this. People have been intimidated by Barbara Hardie's direct line to the Angels and her hyper-awareness of what's going on in "all the spaces in between." Ms. Hardie is a woman of strong convictions and opinions, but most people would be astonished to learn how little this has to do with ego and self. Make no mistake: Barbara Hardie is following the words of the Angels as closely as possible. It is her plight, her mission, her drive. With that in mind, this new communication from above could read either like an apocalyptic shot across the bow, or a message of reassurance to ease hearts and minds in these times. According to the spiritual conduit herself, it is the latter.

"This is an evolutionary battle of duality," says Hardie. "The Purpose for Earth being created originally was a place where humans could decide (through the gift of Free Will) whether we wanted to follow the path of darkness or the path of Light.  Each Soul has had many lifetimes sometimes operating under the umbrella of darkness and others under the umbrella of Light. During each lifetime we had a mission to fulfill."

She continues: "It is now time for Earth to enter the 5th Dimension -- the Dimension of Ascended Masters. Some are referring to this location as The New Earth.  Once this transition takes place life on Earth will be much different/better than we have been experiencing in the past.  The ways of darkness (lies, greed, corruption, etc.) will no longer be allowed. It was and still is the responsibility of all of humanity to Create Heaven on Earth. This would not be possible if darkness was allowed to run rampant as it has for centuries. The experiment of duality and how humans would react to the challenges placed before them is due to expire soon." It is up to humanity through our thoughts, words, actions and feelings (in a positive manner) to regain the freedoms which were rightfully ours."

Barbara Hardie understands how difficult the unknown can be. With sociopolitical debris clogging the airways of our soul, day-in day-out, it is not always easy to separate fact from fiction; electioneering from genuine messaging. Information zips all around us in 2020, and as the reality of COVID-19 ramps up many of us are asking ourselves, and our loved ones, some very serious questions. Why is this happening? When will it end? What can we do to stop it? What comes next?

"The Coronavirus is a spiritual battle and fortunately, we have had help from the higher realms overseeing this experiment," states Barbara Hardie. "The intention for this virus from the dark side was to eliminate multi-millions of humans on Earth.  That number has been reduced significantly thanks to God's intervention. Also God is responsible for neutralizing the nuclear weapons on Earth so that a 3rd World War could not take place. It would appear that this action interfered with the Free Will of the dark ones, however, Jesus/Sananda indicated that anything that would destroy the entire planet/humanity and also have a negative effect on our entire galaxy would not be allowed to happen. Therefore, intervention in these particular situations was spiritually 'legal'.

"Many people ask 'If there is a God, why does He allow such terrible things to happen?' The simple answer is, it was part of the plan for Earth to go through the dark/negative challenges and hopefully would not feel comfortable and would prefer to live life on Earth as we were able to in the Higher/Heavenly Realms.

"As I mentioned, this was an experiment, and as a result of the darkness having such a traumatic effect on humanity, a decision has been made in the higher realms that such an experiment will not be allowed in the making of future planets. Unfortunately, I cannot give you an exact (or even an approximate) date when we will experience Heaven on Earth. But what I can say is that the responsibility is ours.  It is now time for humanity to experience good health, abundance, happiness and Peace on Earth -- to have the advantages in physical bodies as we do in the Heavenly Realm in our spiritual (non-physical) bodies."

So what is the purpose of this message? Right now, people are looking for answers as they timidly reemerge from hiding. Our eyes dart around, clocking every empty shelf; every 6-foot place marker on the ground; every tired, masked face in town. To many Americans, this no longer resembles the country they once knew, and they pray for some sort of solace, even guidance, in these times of great change and unrest. The battle of Light vs. Dark has raged on since the beginning of humanity.

Says Barbara Hardie: "The purpose of this message is to remind all of humanity that when the TRUTH is revealed about what has been going on; how you have been cheated and deceived (referred to as Crimes Against Humanity) by those individuals you trusted and put your faith in, you may experience a bout of disbelief, hatred, anger, resentment, disgust, etc. These are negative emotions and will not serve your highest good.  Keep in mind that you too had lifetimes of playing the role of "darkness". It was mandatory for all humans. I have to admit that those playing the role of "darkness" in this lifetime deserve an academy award and a standing ovation for their performances.  While at times it appears that darkness will win the battle between the dark and Light, I have it on good authority that they have already lost, not only the battle, but the war."

Barbara Hardie is urging people everywhere to keep their heads up and their thoughts, words, actions and feelings as positive as possible during these challenging times. She knows that this battle may get uglier still, but in the end THE LIGHT SHALL SET YOU FREE!  So rather than tiptoe through this strange new world, we should step confidently (but cautiously) and rest easy (but alert) in knowing that in time we will be successful in completing our mission of Creating Heaven on Earth.

"Please, when the TRUTH is revealed, have compassion and be forgiving of their actions and most important, remember that they were playing a role according to their life plan," explains Barbara Hardie.

"FORGIVENESS IS THE KEY THAT OPENS HEAVEN'S DOOR, so falling victim to negative emotions that surface would only lower your vibration and that is not in your highest best interest. Forgiveness does not make wrong actions right, but it helps the soul grow to higher levels and to attain ascension.

"The Beings of Light overseeing this experiment want to thank humanity for volunteering to return to Earth lifetime after lifetime in order to complete the mission of Creating Heaven on Earth. Even though you do not yet see your success, we are able to see it from our Dimension. CONGRATULATIONS!!!

God Bless You ALL!"

Barbara Hardie, an award-winning author and founder of Angel Connections, has authored some of the most inspirational and important books available today.

"Creating Heaven on Earth: A Guide to Personal Ascension": This fan favorite explains humanity's purpose for being on Earth, the process of Ascension and the Path of the Soul from creating a Plan for our earthly journey, learning life lessons more easily, why suicide is NOT an option, and what happens when we return to the Other Side after physical death. This book includes a channeled message from Elvis regarding his suicide.

"Soul Releasement: Assisting Souls Into the Light": A spiritual companion piece which explains procedures to assist earthbound and attached souls (aka ghosts) into the Light, as well as assist Souls from the Resting Area (Purgatory/Bardo) into the Light.

"Darkness: Where Does It Come From?": This explains the purpose for Earth, humanity, duality, Lucifer, depopulation, and what we need to do in order to stamp out the darkness on Earth. It also contains many channeled messages of encouragement from the Ascended Light Beings, as well as messages from Robin Williams, Michael Jackson, John Lennon, Princess Diana, Marilyn Monroe, President John F. Kennedy, and his son, John F. Kennedy, Jr.

The information contained in her books, CDs and workshops is channeled information from the Ascended Masters and Archangels.

Barbara's mission is to help individuals connect with their spiritual self (Soul & Spirit), as well as their Heavenly Helpers – Guardian Angels, Angels, Spirit Guides, Ascended Masters, Higher (God) Self, and to improve the quality of life through spiritual awareness and growth. She offers a variety of spiritual workshops on topics such as Connect/Healing/Manifesting with Angels, Path of the Soul/Reincarnation, Soul's Purpose/Life Mission, Ascension, Soul Attachment/Releasement, and Stairway to Heaven and the One KEY That Opens Heaven's Door. 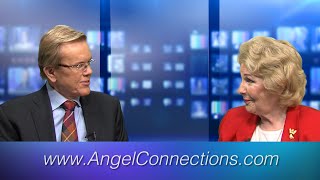