'Your Story is not over after Sports'

"My goal is to help athletes rediscover "the zone," the space that allowed them to find success in the game in the first place and learn how to refocus their energies and direct them to a new vision."

SOLONA BEACH, CA, July 30, 2020 /24-7PressRelease/ -- Author, entrepreneur, and former NFL running back Prince Daniels, Jr. reminds professional athletes that "Your story is not over after sports." He encourages them to keep dreaming, even after their careers in professional sports have ended. Through a weekly online series, Game Beyond the Game: "Talk That Talk", Prince virtually meets up with current and former professional athletes to discuss personal experiences of transition and addresses sensitive topics like current social and cultural issues. Due to the uncertainty brought on by the COVID-19 pandemic, this new platform has proven effective in offering the camaraderie once felt in the locker room for many athletes. The series has attracted the likes of athletes including Super Bowl Champion, Lance Moore, Decathlete Chris Helwick, former WNBA player Carolyn Moos, and former NBA player Mario West.

Past topics have included mental health, depression, suicide, and overcoming loss, as well as a special episode that hosted a panel of former NFL players that talked about the racial and social injustices in professional sports.

"As a former athlete who contemplated suicide myself after my career ended prematurely due to injury, I realize the need for former athletes to find purpose in their lives again," says Daniels. "Professional athletes usually dream only as big as their sports careers, which inevitably comes to an end and leaves you feeling like your best days are behind you."

Daniels hopes to enrich the lives of former professional athletes through his community, Game Beyond the Game, with curated online self-development content, virtual events, and workshops. He developed a system based on a centuries-old principle to help athletes tap into an unknown space within themselves that they did not know existed. Using meditation as the tool for recovery from his depression and loss of identity, Daniels found his calling of helping professional athletes find their vision and purpose in the game beyond the game, life. This fall, Daniels' will release his latest book, "Mindfulness for the Ultimate Athlete: Mastering the Balance Between Power and Peace," which helps athletes reach the highest level of their game. The foreword is written by Daniels' former GA Tech teammate and longtime friend, Calvin "Megatron" Johnson Jr.

"Becoming a professional athlete requires qualities that very few people possess, because if they did, everyone could make it to the NFL, NBA, WNBA, MLB, etc.," says Daniels. "My goal is to help athletes rediscover "the zone," the space that allowed them to find success in the game and learn how to refocus their energies and direct them towards a vision and purpose for their lives."

Daniels' personal story is one of determination and a true-to-life testimony that anything is possible. Once told by a coach that he'd never play college football, let alone make it to the NFL, he became a two-time all-conference tailback and the fourth-leading rusher in Georgia Tech history, with 3,300 yards. He was a two-time All-Academic All-ACC student-athlete, and in 2004 Daniels ran for a still existing NCAA bowl game record of 311 yards and four touchdowns at the Humanitarian Bowl. The Baltimore Ravens drafted him in 2006, and after only playing for three seasons, his career ended due to injury in 2009.

You can learn more about Prince Daniels, Jr. at www.princedanielsjr.com. Past episodes of Talk That Talk are available on the Game Beyond the Game YouTube Channel.

Game Beyond the Game is a platform created by former NFL Running back, Prince Daniels Jr., to help athletes create a sustainable life of purpose after the Game. It provides a haven with open communication lines for current and former athletes to share experiences to support and inspire one another. 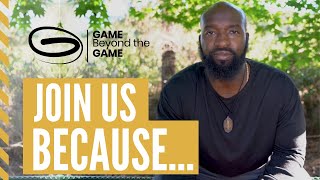 Game Beyond the Game is a platform created by former NFL Running back, Prince Daniels Jr., to help athletes create a sustainable life of purpose after the Game.