Motivating and Inspiring others to Transform Trauma into Triumph

"I am so honored that I can share my story with so many others who are struggling to find their way, as I once was. A big thanks to Brian Thomas for making this happen".

NEW YORK, NY, August 04, 2020 /24-7PressRelease/ -- Amy Jordan announces the début of her recent documentary Amy's Victory Dance, directed by award-winning and two-time Emmy nominee, Brian Thomas. Brian Thomas has worked with icons including Michael Jackson, Whitney Houston, Beyonce, Liza Minnelli, Usher, Pink, and Paula Abdul among others. This documentary feature tells the story of how Amy Jordan turned her trauma into triumph after having her leg crushed by a 15-ton New York City express bus amid her successful dance career.

This film captures the essence of who Amy Jordan is and the hard road which led her to where she is today. From the moment she realized she was going to survive this tragic accident she was determined to fight for her victory dance. Amy's amazing resilience and positive attitude in life led her on a bold life-changing path that has inspired so many others.

"I am so honored that I can share my story with so many others who are struggling to find their way, as I once was. I want to give a big thanks to Brian Thomas for the phenomenal job directing this film, I am so grateful for his amazing creativity and hard work. I also want to thank Brian Rubiano, Post Production Producer, for submitting my documentary to numerous film festivals, these wins wouldn't have been possible without him," said Amy Jordan.

Since the release of her documentary, it has been featured in several exclusive film festivals:

Amy Jordan lives her mantra: "Dance Because You Can."

Amy encompasses a very optimistic spirit and while wearing many hats, she has been able to bring them all together. Her professional knowledge and personal experiences have given her the insight needed to inspire others. She is a motivational speaker, coach, fitness expert, and first and foremost a dancer!

Amy infuses her personal experience to motivate and inspire anyone around her. In 2009 she was hit and run over by a bus in New York City. Told she may never walk again, Amy triumphed over tragedy. Not only is she walking she danced again on stage with her professional dance company: "The Victory Dance Project." Amy Jordan is on a mission of motivating and inspiring others to overcome ANY adversity. She tells everyone she meets, "Please Dance Because You Can." Amy shares her unique D.A.N.C.E. philosophy in her signature presentation "Dance Because You Can." She believes that always focusing on Creating Your own Victory Dance is the key to success in business, leadership, and life!

Amy Jordan regularly speaks for a variety of audiences (ranging from entry-level to experienced executives) for corporations, business groups, associations, colleges, universities, youth groups, and sports organizations. Any organization looking for an inspirational speaker, who will inspire and motivate their audience to overcome adversity and achieve greater success, needs to book Amy for a keynote and/or workshop training. She speaks to groups from 20-20,000+. 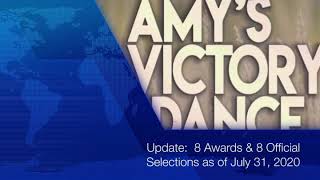