Reality Star, Alicia G, is all set to break into the charts with her upcoming hip-hop dance track.

"The flames that will ignite this track's popularity and send it through the stratosphere are the MILLIONS of Alicia G fans worldwide."

The flames that will ignite this track's popularity and send it through the stratosphere are the MILLIONS of Alicia G fans worldwide. In March of 2019, Alicia G was recruited to join the ranks of the live-streaming app called, BIGO. In less than one year, Alicia's audience skyrocketed to over 1.5 million fans that would tune in nightly to see the hip hop princess perform, DJ, and entertain.

"I was doing my show and dancing during one of the sets," Alicia remembers. "One of my fans wrote, 'It's Little But It Do Jiggle'. I loved that line and it inspired the rest of the song." Alicia is now a verified artist on BIGO and her stunning numbers just topped 1.7 million with no end in sight. Her most loyal of fans have become the 'AG ARMY' and continue to enjoy Alicia's energy and talent night after night. Her hashtag, #BoomBoomBaby is a fan favorite and a sort of mantra for her AG ARMY recruits.

"It's Little but It Jiggles." is produced by multi-platinum producer, Andrew Lane (The Backstreet Boys, Miley Cyrus, Becky G), and will be distributed by White Lion Audio and INgrooves/Universal, making it Alicia G's debut record on a major recording label. When released as a promotional music video, "It's Little But It Jiggles" received almost 2 million views in five days, putting it on the heat list for new music.

Alicia Kristina Guastaferro cultivated her career in Buffalo, New York, as a classically trained vocalist at the age of eight. What made her stand out was her love of pageantry and dance which led fifteen-year-old, Alicia, to travel the United States competing in beauty contests. Alicia had been at the forefront of entertainment since eleven months of age and when she wasn't learning music, or living the beauty queen life, her love of cheerleading and academic studies were prominent.

The world got their first look at the soon-to-be reality star when she was approached by the hit series on ABC, "Wife Swap". The show made headlines, and when producers negatively twisted Alicia's story—portraying an unorthodox and irrevocably damaging defamation of character— the Buffalo native found herself in a world of chaos. The emotional and psychological pain grew apparent as Alicia suffered years of mental and physical abuse from many of those around her. In 2013, Alicia was interviewed on Dr. Phil regarding these struggles and, in the long run, there was only one saving grace: her artistry.

Alicia G began working tirelessly on her musical career—finding herself through the culmination of a zesty charisma and a classy-but-sassy attitude in the world of rap, hip-hop, and pop music. In addition, she began cultivating her own sound through high-energy performances as a songstress and DJ—sharing the stage with the Goo Goo Dolls and playing radio sponsored events.

Garnering the attention of Andrew Lane, he quickly took note of her talent, and the two began cultivating a pop polished sound with an unapologetic, in-your-face, lyrical structure. The songs were to be distributed by Drew Right Music Label, and in 2016, the collaboration's first release, "Pretty Girl" landed at the top of the Independent Music Chart for three weeks making it a success, and a strong foundation, for the reality-star who has her sights set for the skies.

The global release of "It's Little but It Jiggles" is scheduled for September 1st, 2020, but the dance track is available for pre-add here. Fans can also purchase official Alicia G merchandise delivered to their front door from her exclusive online store.

Alicia G - It's Little but It Jiggles (Official Video)
https://youtu.be/3TChNhORyes

White Lion Audio is a US-based independent record label and services company with global distribution through The Orchard and INgrooves Music Group. They are dedicated to supporting artists of all genres and walks of life. 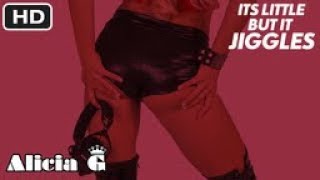 When released as a promotional music video, "It's Little But It Jiggles" received nearly 2 million views in five days, putting it on the heat list for new music.