DownTown Mystic Goes Back To The Future

US Rocker to release Single & Album of Early Unreleased Material.

it seemed like the right time to tie-in a release of the early material, along with the other projects that I've been involved with

NEW YORK, NY, September 02, 2020 /24-7PressRelease/ -- Sha-La Music, Inc. announces the worldwide release of the new two-song 3-Way Heartbreak single by US Rocker DownTown Mystic on September 18. The single is being released in conjunction with the DownTown Mystic: Used Records History 1979-1985 album, which is scheduled for release on November 6. Both releases will be digitally distributed worldwide via The Orchard/Sony Music, with the single now available for pre-order. The single will go to Worldwide Radio on September 14 via the iPluggers online platform.

DownTown Mystic's latest album, Better Day, was released in January and has been a critical success, yielding 5 singles with consistent radio airplay on over 300 stations in 27 countries. Sha-La Music is releasing the DownTown Mystic: Used Records History 1979-1985 album to tie-in with 2 other projects that DownTown Mystic has been involved with. The 1st project, The Discontent Specialty Shows album, was released on July 24 and co-produced by DownTown Mystic writer/producer Robert Allen. The album marks the 20th anniversary of the band making Rock Radio's Specialty Charts and gaining national recognition. The 2nd release will be the Used Records History album in November and the 3rd will be the One More Chance featuring DownTown Mystic album by longtime collaborator Bruce Engler in 2021.

The 3-Way Heartbreak single also includes the track Same Old Lover, recorded in 1983. With its use of synths and drum machines, 3-Way Heartbreak fits in nicely with the current comeback of 80s music. Stranger Things Music Supervisor Nora Felder loved the song and wanted to put it in the 2nd season of the show until she found out that the song wasn't a hit in the 80s because it hadn't been released. Another track from the same recording sessions, Fly Like The Wind (also on the album), was selected by Music Supervisor Alexandra Patsavas for her TV show The Carrie Diaries because it was recorded in the 80s when the show takes place. Fly Like The Wind has become one of DownTown Mystic's top sync-licensing tracks and will be in the upcoming Disney movie Flora and Ulysses. Overall, DownTown Mystic has sync-licensed music on over 200 TV shows.

The idea for releasing an album of previously unreleased pre-DownTown Mystic material came from an unlikely source. In 2017 Robert received a letter in the mail from renowned British rock journalist Nik Cohn, who had been living in Asbury Park, NJ doing research for a book on the late 70s-early 80s music scene there. He had come across a band called The Tupelos that had made an impression during that time and had traced the band back to Robert. At first, Robert thought he was being "punked", but after contacting Cohn (considered by many to be the father of rock criticism), he provided Cohn with the information he was seeking.

It got Robert to go back into his musical archives, listening to tracks by The Tupelos, as well as the solo material he made after leaving the band. Much of that material would form the basis for DownTown Mystic and includes the original version of the current single Modern Ways. Robert explains, "It wasn't until this pandemic stopped everything that I had the time to go back to that material and think about releasing it. With the Better Day release winding down it seemed like the right time to tie-in a release of the early material, along with the other projects that I've been involved with". The full story of how DownTown Mystic: Used Records History 1979-1985 came to be can be found in a new blog post on the DownTown Blog.

"It's always a pleasure to find a good taste of rock n roll to dance to. Seasoned artist Robert Allen or better known as DownTown Mystic, has served up another project to be remembered." Skope Magazine

"Allen wears his influences heavily on his sleeve. With a golden vintage rock vibe, he totes the line between "old school" and modern with ease." WithGuitars Magazine

"You have to have all those sounds in your back pocket and still give a bit of your soul, if nothing else. Allen passes all of these tests with flyling colours." Spill Magazine 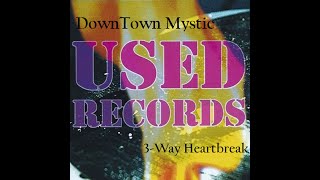