A Bobby Vinton recording of "Proud to be American" is released for the first time.

"Not only is it an unreleased Bobby Vinton song, but it's Bobby doing a rock song," says Johnny Prill.

BAD AXE, MI, September 17, 2020 /24-7PressRelease/ -- Johnny Prill is excited to announce the release of the rock version of a Bobby Vinton song (written by Johnny and not previously released), "Proud to be an American."

"Not only is it an unreleased Bobby Vinton song, but it's Bobby doing a rock song," says Johnny Prill. "It was something very different for him, being known as a singer of love songs. I think his fans would love to hear Bobby sing this rock version of 'Proud to Be an American,' which - may I add - turned out fantastic! I'm elated that I finally get to share this song with all of Bobby's fans."

Billboard Magazine referred to Bobby Vinton as "the most successful love singer of the Rock Era." From 1962 to 1972, he had more number one records than any other solo male artist; he has sold over 75 million records. Among many other awards, Bobby has been honored with a bronze star on the Hollywood Walk of Fame. Known as "The Polish Prince," Bobby's music pays tribute to his Polish heritage and "Proud to be an American" is typical of this with the opening line being: "I'm proud to be an American of Polish ancestry."

Johnny wrote the song in 1987, and a toned-down version was briefly released in 1988. The rock version has never been released before.

"Johnny Prill is one of the most creative songwriters of our time," says Bobby Vinton. "His warmth and understanding blends itself into his lyrics and music. It's a pleasure to know Johnny as a friend and an equal pleasure to record his song."

"Proud to be an American" can only be found here on Johnny's own YouTube channel. 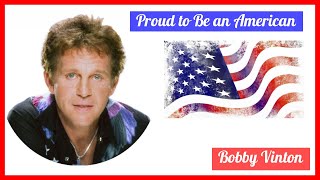 Bobby Vinton - Proud to Be an American (Unreleased Rock Version - 1988)