JWed enables all Jewish singles, whether observant or less-affiliated, to take charge and conduct their own searches within the largest network of authentic and sincere marriage-minded Jewish singles.

The online Jewish dating service was a trailblazer, launched in 2001 to empower Jewish singles to find their soulmate. With over 3,500+ known marriages, JWed.com is the most successful online Jewish dating for marriage service. Ben Rabizadeh, Co-founder and CEO stresses known marriages "as we believe that many members who met on JWed, have not as yet informed us of their marriages."

Despite the months of Covid-19, membership has actually grown and as Co-founder and CMO Derek Saker says, "In distressing times like the current world situation, the challenges of being alone are compounded for many and really only further motivates those who are marriage-minded, to find their soulmate."

JWed enables all Jewish singles, whether observant or less-affiliated, to take charge and conduct their own searches within the largest network of authentic and sincere marriage-minded Jewish singles.

He believes the success is nowhere more expressed then in the statistic that 65% of all JWed marriages are woman initiated - where the first contact was made by a female member, reaching out to a male member.

As he conveys - in the traditional Jewish dating world, and certainly the frum world, very often it is the women who must play second-fiddle and wait by the phone as it were – and where taking the initiative may even be frowned upon.

He adds "With JWed, members know who they are, and know what they are looking for – and have little till no inhibitions in taking the driving seat."

With JWed averaging 8 marriages a month, it seems many are finding their soulmate at the right place.

JWed is the #1 online dating service for authentically Jewish singles seeking committed relationships. Our innovative and proprietary filters ensure a comfortable environment for singles of all backgrounds including from Reform and Unaffiliated to Conservative, Orthodox, or Hassidic communities. JWed is a family-owned company, with offices in New York and Tel Aviv, run by Jews for Jews. We've brought thousands of Jewish singles together in marriage since 2001. For more information, please visit https://www.jwed.com/ 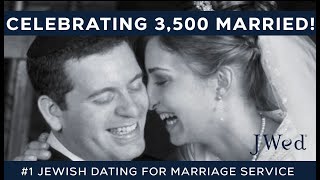