A Young Frenchman Honors World War II American Heroes in his First Book, "Till Victory - The Second World War By Those Who Were There", After 15 Years of Research!

Clément Horvath is a 32-year-old history-buff from France. For more than 15 years, he has collected thousands of letters from Allied soldiers from World War 2, and published these moving and new wartime account in his first book, "Till Victory".

These poignant writings, completed in the mud of the battlefields, reveal the hopes, doubts and fears of these young people sent to hell, making Till Victory first and foremost a book about peace...

TOURS, FRANCE, October 16, 2020 /24-7PressRelease/ -- Although he hosts a podcast in English in which he interviews World War II veterans and received the "History 2019" award from the hands of Princess Caroline of Monaco and First Lady Brigitte Macron, Clément insists that he is not a professional historian, simply a history enthusiast eternally grateful for his freedom: This is my way of saying 'Thank You'

Till Victory was an award-winning success in France last year. The book covers the whole war in Western Europe from 1939 to 1945 through the letters and diaries of more than 50 soldiers from all Allied nations, and honors men and women who never had a chance to tell their stories...

75 years after the end of World War II, thanks to British publisher Pen & Sword Books, the English version Till Victory: the Second World War by those who were there will now be available worldwide on October 30th, 2020 (distributed in North America by Casemate).

French author Clement Horvath insists that he shouldn't be considered as an historian, but simply a history buff. Nevertheless, he has combined his expertise in images and digital tools with his 15-year collection of letters and relics from the Second World War to conduct his research and carry out his ambitious project from A to Z, in complete independence. All these years of hard work and passion have made his book Till Victory an award-winning bestseller in France.

Clément is fluent in English and available for interviews. 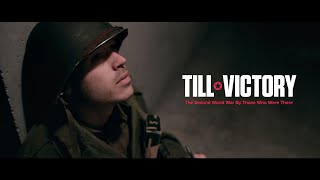