Sleep Is For Billionaires The Podcast

Sleep Is For Billionaires The Podcast gets insider information from Celebrities and Entrepreneurs on "HOW TO" become an Industry professional. Hosted by Jonni Vegaz

The "Sleep Is For Billionaires" Brand represents those striving to achieve their ultimate goals.

LOS ANGELES, CA, November 17, 2020 /24-7PressRelease/ -- Recording artist, Actor, Host, and Entrepreneur Jonni Vegaz was born and raised in New York City in one of the most dangerous neighborhoods in the south Bronx. it was at the age of 9 that he began to grow a passion for music when he began writing down the lyrics of songs by other artists which ultimately enabled him to learn song writing format to create songs of his own. His Dominican roots exposed him to a wider variety of music and culture which allowed him expand his creativity. From then on, his passion for music grew and he began participating in numerous rap battles and talent shows and quickly became well known for his rap talent.

It was not until the age of 15 that Jonni Vegaz decided creating music was one of his many gifts. He relocated to Paterson, N.J. in 1999 where his ambition grew even stronger, collaborating with other local artists from his neighborhood, being featured on mixtapes hosted by local d.js, and performing at nightclubs, but that was only the beginning. In 2002, he and his family moved down to Tampa, FL, and in 2007, released his debut mixtape, ''Stop da Bank Vol.1'', following up with "Champagne Hangovers" in 2008 which quickly gained him local fame in the Tampa Bay area.

As the release of music and music videos continued, he began performing in open mic shows and appearing on various mixtapes. He continued to put his name out there gaining more exposure Jonni Vegaz remained an independent artist and founded Stop Da Bank Entertainment, an multi-media production company and S.A. Publishing releasing more remarkable albums including ''Life Is Good'', "Sleep Is For Billionaires", and "The LL Cool J Project" currently available on iTunes and "Sleep Is For Billionaires II" set to release very soon.

Taking his talents to Hollywood, "Sleep Is For Billionaires The Podcast" was born. SIFB The Podcast is dedicated to getting insider information from celebrities & entrepreneurs for individuals looking to become industry professionals. Jonni has created this educational-content platform to give guidance to the current and future generation of entrepreneurs no matter their level of success. The sky is obviously not the limit for Jonni Vegaz.

Sleep Is For Billionaires The Podcast gets insider information from Celebrities and Entrepreneurs on "HOW TO" become an Industry professional. Hosted by Jonni Vegaz

On this podcast course you will learn how to inexpensively start a podcast through the tricks of the trade I learned creating my own podcast.

We will discuss creating a niche, merchandising, distribution, monetization, video editing, marketing & promotion, and MUCH MORE!

I made this 1 hour course as simple as possible for the beginning stages of podcast production with little to no budget.

With the knowledge you will receive on this course you have the tools to inexpensively produce your own podcast.

The "Sleep Is For Billionaires" Brand represents those striving to achieve their ultimate goals. If you want to support our message we have merchandise available on website link above. 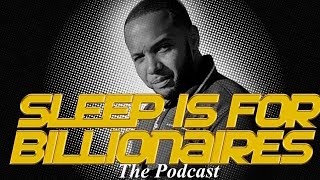