Smith has chosen #BlameRobertRodriguez as a tongue-in-cheek theme for this final push, deflecting blame as he contacts friends, loved ones, and social media contacts once again...

LOS ANGELES, CA, March 29, 2021 /24-7PressRelease/ -- "Vengeance Turns: The Motion Picture" launches a final modest crowdfunding campaign through Kickstarter on April 6, 2021 to complete some final Visual Effects (VFX) and Sound Effects (SFX) work along with other details. Against all odds, including the COVID-19 Pandemic, Robert Christopher Smith shot this female-led revenge western as his first feature film during October 2020. Since principal photography wrapped on October 23, 2020, Smith has edited the film and says the only thing missing are those few details, most importantly 2 VFX-heavier scenes. One features a character enigmatically referred to only as "Voice in Darkness", and the other features Jamald Gardner who plays villainous "Jefferson Coletrain" in a musical number where Gardner sings "I'm A Rolling" during a hallucination.

The production is hosting an online "Launch Party" featuring members of the cast and crew, along with a whole lot of excited fans. While the campaign will offer a number of exciting exclusive rewards including actual props from the set, Smith says his main goal with this crowdfunding effort is to win over fans who want to watch the movie and get their name in the final credits. Backers who get a private digital link for the film will be among a very exclusive group who get to see "Vengeance Turns: The Motion Picture" early since it will be submitted to Film Festivals which precludes its being broadcast, streamed or shown in any other way until it making its "Official Premiere" under the rules specific to these events.

Smith has chosen #BlameRobertRodriguez as a tongue-in-cheek theme for this final push, deflecting blame as he contacts friends, loved ones, and social media contacts once again to support "Vengeance Turns: The Motion Picture". "Blame Robert Rodriguez" are Smith's opening words on his Kickstarter Video as quick cuts from storyboards with related clips from the movie flash by for viewers, and before Smith pops in appearing on screen to continue making his case for the support of viewers. Before its end, Smith name checks David Lynch and Quentin Tarantino as inspirations and influences, but says that motivational words from Rodriguez, whom he has never met in person, were the "wind beneath his wings" when overcoming the various obstacles and challenges that presented themselves while shooting the film on a nearly non-existent budget, thus "Blame Robert Rodriguez".

ABOUT "VENGEANCE TURNS: THE MOTION PICTURE"
In 1876 California, Rebecca Falcon and her family are brutally attacked and left for dead. With guidance from a mysterious tribe of "lost people", Rebecca rises from the ashes as the bloodthirsty vigilante "Mia", hellbent on revenge. The story which was previously released as a well-received podcast during Summer of 2020 is based on the original screen story by Robert Christopher Smith and Amanda Fry. The film is currently being finished and prepared for submission to Film Festivals worldwide.

For Media or Interviews Requests 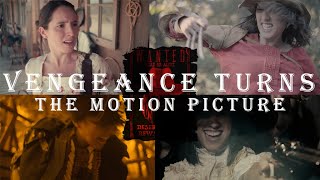 Writer/Director Robert C Smith partnered with the band DEVIL'S HOLLOW to produce a music video for "The Charm", with exclusive footage from the movie.