The video imagery comes from my interest in the occult, with its contrasting light and darkness, and the idea of the divine feminine as an otherworldly mentor and power, in domesticity and in nature.

NEWARK, DE, March 30, 2021 /24-7PressRelease/ -- The art-rock band The Collingwood has released an atmospheric single, "Confetti", and an accompanying pagan-centric music video. "Confetti" is the first release from the band's upcoming full-length album "You Lust or You Rust", available this autumn. Filmmaker/Guitarist/Vocalist Chris Malinowski, the band's front man, directed the picturesque and somewhat controversial video. "The video imagery comes from my interest in the occult, with its contrasting light and darkness, and the idea of the divine feminine as an otherworldly mentor and power, in domesticity and in nature," Malinowski notes. Cinematographer Ian Mosley-Duffy photographed the video, and editor Colby Bartine assembled the footage. Both were crew members on Malinowski's feature film "Yes, Your Tide is Cold and Dark, Sir." (2013).

A departure for The Collingwood, which is customarily a hard rock quartet, Malinowski recorded "Confetti" with only two guest musicians, percussionist/producer Rich Degnars of DaSa Studios and sixteen-year-old singer Jules Corridori. Malinowski explains "I wrote the song at my backyard fire on a heavy September afternoon in COVID isolation. My wife and I had just lost her mother, and we were approaching the one-year anniversary of our dog's passing. To boot, a listlessness had pervaded our lifestyle, and I was experiencing an existential longing for desire. The lyrics are a plea to the deities and cycles of nature to deliver that elusive desire. I wanted the recording of "Confetti" to reflect the sparse-austerity of my heart on that distant afternoon. I think I achieved that with two people."

Traditionally, The Collingwood is Chris Malinowski (guitar and vocals), James Pennington (guitar), James Boruch (drums), and Greg Lundmark (bass). The full band is in the throes of recording the new record with engineer Rich Degnars. The band will release a second single, "Jouissance", and its accompanying music video this summer. Both will feature Jules Corridori. "Jules has a hearty, nuanced voice that encapsulates both shadow and sun. She sings like no one I've ever heard," Malinowski says. The Collingwood's music and videos are available on all major platforms. 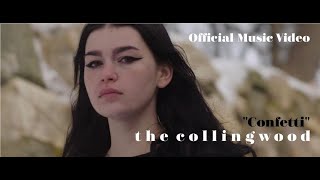