They aren't just true Golden Girls fans, but true intellectuals who understand the significance television storytelling can have on culture.

Yes, that said 'scholarly' — The Golden Girls isn't only full of laughs about incontinence or old ladies having sex. Lauren Kelly and Sarah Royal, co-hosts of the podcast, review all 180 episodes of the 1980s sitcom through the lens of feminist portrayals, ageism, progressive values, LGTBQ issues, chosen family, ethical considerations, and television and media academic scholarship.

But they also giggle about incontinence, too.

The Season 3 launch of the Enough Wicker podcast coincides with Season 3 of The Golden Girls, debuting at 9:00 p.m. — as an homage to The Golden Girls' original time slot on NBC — on Saturday, April 10.

Enough Wicker's S3E1 episode, titled Jenny Lewis and the Blues, covers the acclaimed Golden Girls episode Old Friends. It tackles the complex topics of Alzheimer's disease as well as a Girl-Scout-esque character (played by Jenny Lewis of the band Rilo Kiley, in front of whom Lauren tripped over her own shoelaces once) holding a teddy bear hostage.

Guest scholar Deborah Macey, a Communication Studies Professor at University of Portland, reports that Lauren and Sarah "are not just true fans, but true intellectuals who understand the significance television storytelling can have on culture." Rachel Kaser of The Next Web says that Enough Wicker "knows their stuff" and that "they talk about everything from film-making techniques and literary devices in each episode, to commenting on tiny details even I've never noticed before."

But how is this relevant when the show debuted nearly 40 years ago, you ask? The Golden Girls is enjoying a resurgence in popularity right now; one that is extremely rare for vintage network television shows. In April 2020 alone, Hulu viewers binged nearly 11 million hours of the show, according to the New York Times. Season 3 of The Golden Girls won the Golden Globe for Best Comedy Series, and both Bea Arthur and Estelle Getty won Emmy awards for their third season performances.

Episodes of The Golden Girls that Enough Wicker will tackle throughout their third season include scholar-worthy topics such as anti-semitism, transgender issues, abusive relationships, the Cold War, and the infamous "blackface" episode Mixed Blessings, which was pulled by the streaming platform Hulu last summer.

Enough Wicker takes a scholarly look at the world's greatest television show, The Golden Girls, through an acclaimed podcast and website. The podcast features hosts Lauren Kelly and Sarah Royal going episode by episode through all 180 episodes of The Golden Girls, analyzing themes, intellectualizing scenes, interviewing scholars, and often giggling with delight.

Enough Wicker enjoys a 5-star rating on iTunes and has over 20,000 podcast plays, 350 weekly listeners, and dozens of scholarly articles on its website dedicated solely to The Golden Girls.

Find the Press Kit, view the podcast trailer, read scholarship on The Golden Girls, and listen to the podcast at enoughwicker.com.

ABOUT THE GOLDEN GIRLS

The Golden Girls is an American sitcom television series created by Susan Harris that originally aired on NBC from 1985 to 1992, with a total of 180 episodes spanning seven seasons. The show stars Beatrice Arthur, Betty White, Rue McClanahan, and Estelle Getty as four older women who share friendship and a home in Miami, Florida.

The Golden Girls received 58 Primetime Emmy Award nominations, with eleven wins. All four actresses won an Emmy Award for their performances, a milestone that only three other series — All in the Family, Will & Grace, and Schitt's Creek — have achieved.

Even before it went off the air, The Golden Girls went into syndication and has never left, showing on Lifetime, TV Land, and The Hallmark Channel before streaming on Hulu — hence why new generations continue to discover the show. One look at The Golden Girls merchandise on sites such as Etsy can quickly show the love that new legions of fans have for Dorothy, Blanche, Rose, and Sophia. 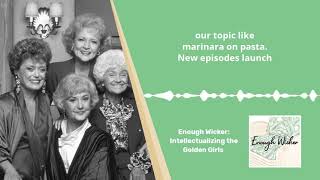