But can they give a complete user experience?

"We were pleasantly surprised to learn how little personal data CollabDeen collects from its users and location is not stored on their servers," said Ahmed Al-Shehab, Fusion Community, New Jersey.

SINGAPORE, April 22, 2021 /24-7PressRelease/ -- Recent experiences by Muslims using mobile apps for their daily Islamic rituals have left many of their users feeling wary over privacy concerns, including third parties tracking the users' locations. CollabDeen, being mindful of this issue, is launching its latest app features for the global Muslim community that prioritizes user privacy, data security, and an ad-free experience.

Privacy is at the core of the CollabDeen experience where users are in control over the transparency and control over their own data. The app enables users to practise Islam on a personal level and connects users to engage on a community level. CollabDeen's privacy-first approach starts with capturing minimal data and displaying very little to others on the platform.

In line with celebrating the Muslim holy month of Ramadan this year, which starts from 13 April 2021 until 12 May 2021, users can access a full year of the app's premium features for free at CollabDeen's download page when they download the app in Ramadan.

While popular Muslim apps allowing third-party location-tracking data access are a concern for their users, CollabDeen has built a mobile app for users to use as anonymous access. The app does not require live location, with only the user city is required to enable accurate prayer times, nearby communities and qibla direction. This means that CollabDeen does not have any user data to share with third parties.

"We were pleasantly surprised to learn how little personal data CollabDeen collects from its users and location is not sent or stored on their servers. Immersive features for the mosques & Islamic Centres, and the users - all this is at a negligible cost," said Ahmed Al-Shehab, Fusion Community, New Jersey.

"We're empowering faith-based Muslim communities to connect with their users on a daily basis with a single digital mobile app. We currently have over 500 communities globally, and there is a surge of interest during Covid-19 as we enable digital collaboration in minutes with private and safe community apps and platform. Our users can be rest assured that we would handle your data as an Amanah, a trust bestowed on us," says Fateh Ali, co-founder and CEO of CollabDeen.

App users can fulfil their religious obligations where they use features such as AR Qibla, for locating the direction of Mecca in Augmented Reality, Prayer Times based on city, listen to Quran radio, read the Quran, prayer requests, special dates in the Muslim calendar, and many more. The Community app lets users engage with its community, user-to-community chat, RSVP to community events and booking slots, admin can announce community updates and engage with community members on the go.

ABOUT: CollabDeen is a revolutionary social platform that provides Muslims globally with the means to engage with the community like never before. From fulfilling individual religious obligations to empower charities, mosques and non-profits to change the world with its business-to-business (B2B) community collaboration app and platform that uses best in class data-encryption technology to keep communities and users, private and safe. For more information, visit CollabDeen's website. 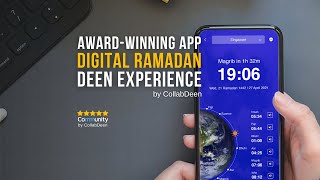