Take control of your presentation with new show and editor controls

Amongst users, designers will be particularly happy that gradient text and custom underline colors now allowing them to create gorgeous presentations, without needing to export graphics from Photoshop

ATLANTA, GA, May 06, 2021 /24-7PressRelease/ -- Renewed Vision has announced the release of ProPresenter 7.5, the latest version of their award-winning presentation software for sports, broadcast studios, concerts, conferences, and houses of worship.

7.5 introduces Show Controls, one of ProPresenter's most requested features, which redesigns the user interface and gives easier access to critical functions during a show, while still keeping content easily accessible. This is the biggest change users will notice, as Props, Messages, Stage, and Timers have all joined the Audio bin in the right sidebar, allowing ongoing access without covering slides.

Renewed Vision has also split out Props and Messages into separate layers, bringing the total number of layers up to 7, and 1 additional layer for dedicated audio.

Amongst users, designers will be particularly happy that gradient text and custom underline colors now allowing them to create gorgeous presentations, without needing to export graphics from Photoshop. For the power users who load their stage displays with data, even more data links are available, like audio countdown announcements videos, and custom slide labels, giving more options for what the band sees from the stage.

For the audiophiles, enhanced audio behavior controls allow for fine-tuned audio interaction and playback with visual elements, while Mac users can rejoice over native support for NDI on Apple Silicon, removing the need for Rosetta.

ProPresenter 7.5 includes something specifically for international customers, adding native in-app language support for Chinese (Simplified) and Czech. This is in addition to the previously-supported English, Spanish, Korean, Portuguese, French, German, Russian, and Norwegian.

Renewed Vision has publicly stated their vision is to create world-class presentation tools, and ProPresenter 7.5 clearly continues that goal, as it raises the bar for presentation software around the world. It is available today for all ProPresenter+ members, and publicly available to anyone as a free trial download. For the complete list of over 40 improvements and bug fixes, or to download the ProPresenter trial, visit RenewedVision.com.

Founded in 2000, Renewed Vision's mission is to create affordable and reliable tools with which productions can create engaging experiences and tell the stories that change the world. For more information on their product lines, used by the NFL Draft, Olympics, Office of the U.S. President, NASA & more visit their website at www.renewedvision.com 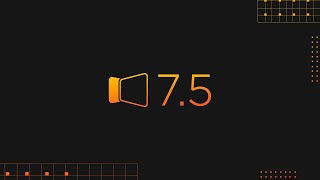