Confirmed Emmy Winners, Nobel Laureate, Founders, CEO's and Leaders in their field engage in video live networking, Q & A, Awards Ceremony and screenings to support the nominees from 23 countries during the festival.

"Our nominees overwhelmingly voted to have a combo online experience this year. We are proud to have created a festival that is as multifaceted as the creative work we celebrate." -Dir Susan Johnston

LOS ANGELES, CA, May 17, 2021 /24-7PressRelease/ -- The New Media Film Festival® has pivoted online for the 12th Annual event on June 2-3, 2021. This allows speakers to interact with guests in VIP Networking live video tables to being part of the live Q & A after each screening session. In addition, the awards ceremony is where you will experience who wins in real time, 23 countries are involved this year. Ticket and scheduling information are available at newmediafilmfestival.com/events-2.

Virtual ticket holders will be able to take virtual selfies on the "Red Carpet," stream live music performance, watch the Awards Ceremony at a virtual "ballroom table," and of course view groundbreaking creative work from over a hundred nominees in 28 classic & tech categories like Film, TV, Podcasting, Virtual Reality (VR) and Artificial Intelligence (AI) from all over the world.

John Strasberg - Nominee, Director - Adam's Apples
Is the son of Lee and Paula Strasberg of the Actors Studio

Samarah Conley - Live Music Performance
Samarah is a 13-year-old award-winning recording artist who will be performing her latest single, Movin' On, as a live performance in Opening Night Programming.

Kyle Schember - CEO, Subtractive.net
Kyle will be announcing our new category NFT winner live during the awards ceremony.
NFT are a new way to empower and residualizing the content creator community.

Dr. Steven Small - Leader in Quantum Health field.
Keynote at Bioenergetic Medicine Conf. Int'l. Emmys® Magazine named him in their Best of edition for his work with NHL, Sirius, & CBS

Craig James - Founder/CEO, International Screenwriters' Association
Provides screenwriting resources & opportunities to writers around the world to better their skills & advance their careers by offering knowledge and information on the art, craft, and business of screenplay writing.

Melessa Y. Sargent - President & CEO, Scriptwriters Network
Educating writers on how to write that "perfect" script to get them noticed, how to work on a TV show, sell a feature, including writing for new media.

The 2-day event will feature a performance from award winning music prodigy, Samarah Conley and a podcast entry with "American Pie" songwriter Don McLean. Another "don't miss" entry, LIGO, documents the work of 3 Nobel Laureates who made the first historic detection of gravitational waves from the collision of two black holes and were listed in National Geographic's "Top 20 Discoveries of the Decade."

June 2 & 3 2021 online, this year only. Join guests from around the globe to mix, mingle, network, enjoy screenings as we honor stories worth telling. www.NewMediaFilmFestival.com for tickets.

About:
The New Media Film Festival® part of the United Nations Millennium Project, was launched as an annual event during the 2009 C3: Center for Conscious Creativity "Immerse in the Future" symposium held in Los Angeles. The festival is the brainchild of media futurist and current president of Select Services Films Inc. Susan Johnston. She saw the need for a unique event specifically catering to new media content artists that would "look at new technologies and how it merges with the story so people can go on the journey the story set out to create." The result is a film festival that creates "new opportunities outside the norm to bolster creators in media." 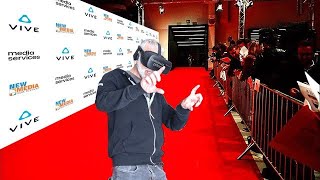