BURBANK, CA, May 23, 2021 -- International musician Hueimin Kuan compose music, including her newly composed song, titled "The Leech," which will be used in the upcoming film by IMC Film Production, Thorns Tour UFC, a documentary film about Ultimate Fighting Championship (UFC) fighter Li-Jingliang. This film is produced and released By IMC Film Production.

Hueimin Kuan's music for film includes producing the scores for the films Zero, Demon's Angel, and Triple Love and she is contracted for IMC Film Production's upcoming films Face, Nest, Cold Day in Hell, and Pink. IMC Film Production is a major independent film production company which is owned by Mimi Masters.

For Thorns Tour UFC, the documentary of Ultimate Fighting Championship (UFC) boxer Li-Jingliang, musician and composer Hueimin Kuan will perform the song "The Leech." This song was written, performed, and produced for this film soundtrack. Hueimin Kuan is the performer, singer-songwriter, composer, arranger, producer, and lyricist for the song "The Leech," in collaboration with LA-based Musician Yusuf A. Dyse, Disney Saxophonist EJ Villanueva, and LA-based Mixing & Mastering Sound Engineer Jason Leo.

This film score was composed during 2020, a period that was particularly challenging for many musicians and filmmakers. Hueimin Kuan, who started playing piano at the age of 5, developed a love for film scoring and became a professional internationally renowned musician proficient in many musical instruments, composer, singer/songwriter, and music arranger. IMC Film Production is excited to have Hueimin Kuan's music as an important element of the documentary film Thorns Tour UFC.

Hueimin Kuan is a passionate composer and musician who has built an impressive career in music for critically acclaimed films, television programs, and commercials. She has won numerous awards and competitions in singing and music for her songs as well as for her film scoring. She appeared on national television competing in the ETTV Top Star 2019 Annual Talent Search Competition, she competed in the T-List Original Music Competition, and she was a Semi-Finalist in the 2020 International Songwriting Competition. Her competitions and successful career in music has received attention in the media in Yahoo! News, and she has composed and performed the musical scores for award winning films such as Zero, which won the Award of Excellence at the Los Angeles Global Shorts Awards. Her dedication has earned her a musical contract with IMC Film Production to compose and perform music for film, television, and commercial productions.

During the pandemic, there have been many closures and cancellations, but IMC Film Production teams have been diligently working in safe conditions to produce this important documentary, collaborating with Hueimin Kuan through virtual and online platforms, and this impactful film project was successfully completed. 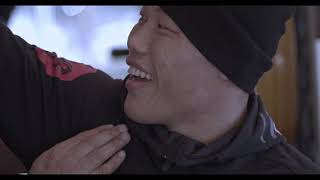