The Trigonal Gallery PRIDE exhibit physical opening is at 37 Troutman Street Brooklyn NY Saturday, June 5 and Sunday June 6th from 11AM to 8PM EST. Tickets with timed entry are available through Eventbrite.

"There's nothing stopping you from being the unicorn of your dreams," says artist, performer and sculptor Darrell Thorne.

NEW YORK, NY, June 02, 2021 /24-7PressRelease/ -- "There's nothing stopping you from being the unicorn of your dreams," says artist, performer and sculptor Darrell Thorne. Best known for his work on RuPaul's Drag Race and HBO's High Maintenance. Thorne understands better than anyone how to embody the fantasies that spring from his authentic self, which many in the LGBTQ+ community will tell you is what Pride is all about. Beginning May 31st, 2021, Thorne will bring his unique sculptures and makeup/body paint creations to life as he headlines the Pride exhibit hosted by the innovative Trigonal Gallery.

Trigonal's Pride show is loud and proud, featuring Thorne's acclaimed headpieces, the likes of which have been seen not only on Yvie Oddly's winning look during Season 11 of Drag Race, but also on Madonna in her "Living for Love" video and most recently on "Queen Diva" Big Freedia for the cover of Bust Magazine. Thorne's creative approach to transformation encourages audiences to question their ideas of beauty, as well as their perspectives on gender fluidity and what signifies masculinity and femininity.

The Trigonal exhibit aims to shed light on the most distinctive LGBTQ+ and allied artists working in multidisciplinary mediums today. One such ally, The Sucklord, is a pop artist who made his name on reality TV series such as VH1's Can't Get a Date and Bravo's Work of Art. Over the past two decades The Sucklord has come into his own by crafting unlicensed action figures and toys, particularly those based on Star Wars collectibles, through his company Suckadelic. Viewers of Trigonal's Pride show can expect to see truly original Suckadelic action figures that have never before been released.

Alongside TV icons Thorne and Sucklord is British-born Stuart Sandford, whose pieces have been exhibited around the world for shows including Out-Spoken: 50 Years of Pride at Childs Gallery in Boston; multiple Queer Biennals in Los Angeles; and Boys! Boys! Boys! in London and Amsterdam, as well as collections such as the Sir Elton John Photography Collection.

Pride will offer a plethora of digital and physical components. The online exhibit opens Monday, May 31st on Artsy.net. Saturday, June 5 and Sunday June 6th will see a physical opening at 37 Troutman Street in Brooklyn, hosted by Brooklyn Collage Collective founder Morgan Jesse Lappin. The opening runs from 11AM to 8PM EST. This live event will be ticketed and timed for attendees. Some artists will be present throughout the weekend. Due to Covid restrictions, tickets offered through Eventbrite will allow visitors to select the time they want to enter the building.

On Monday, June 7th the physical show will move to Strictly CBD at 394 Communipaw Ave in Jersey City New Jersey where it will open to the general public and remain throughout the month. Strictly CBD, founded by Jeffrey Devine, is one of New Jersey's most pioneering CBD and hemp retail stores.

That evening, Trigonal Gallery will host an online Zoom open house with all of the artists at 8pm EST. Viewers can access this event via the Trigonal YouTube, Facebook and Twitch pages.

The Pride show runs May 31st through June 30th, 2021. Learn more at http://trigonalgallery.com or @TrigonalGallery on social media.

Trigonal Gallery is on a mission to get a piece of artwork into every home. Beyond the high priced artwork of blue chip artists, Trigonal Gallery works with creative emerging artists to find their audience of collectors. Trigonal pairs physical artwork with digital NFTS as the new method of providing certificate of authenticity. 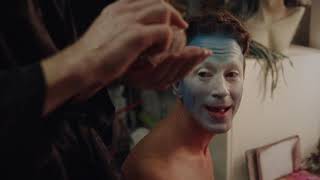