Is Dogs Den Films the "Matrix" of the Indie Animation World

AURORA, CO, June 10, 2021 /24-7PressRelease/ -- This year alone, independent urban film company Dogs Den Films, L.L.C. www.dogsdenfilms.com released two animation projects. Their first show, Fish, is an animated mini-series about an angry radio host whose rejection from the industry has caused a lifetime of callous and anger and revenge. Along with digital animator, Juan Mont from Stephen Colbert's Our Cartoon President, writer, and director Curtis Johnson created palpable animation content with witty and humorous moments. The miss in Fish was in the character development and the number of short episodes. After watching the entire mini-series in under five minutes, you are left wanting more, but more of what is the question?

The second project, Ranch Up, is a short film whose tagline reads "Humorously bridges politics and inclusion," which in most cases is a fallacy. The story centers around a small Napoleon rock from earth (voiced by Trenell Blanks), and a dim pessimistic star from the galaxies (voiced by Michael McMahon); book the same Air BNB in the Middle Realm. There are no other rooms available, and despite their differences, they bond over a serving of ranch dressing. That's it! No, really that's it! Ranch Up and its intentional pun on salad dressing may not have saved the world's problems, but it does prove one thing for sure, that Dogs Den Films is making a name in the world of independent urban-inspired animation. Are they in the matrix of the animation world? Or maybe they are the glitch for which the industry is looking. Only time and the release of more projects will be the judge. 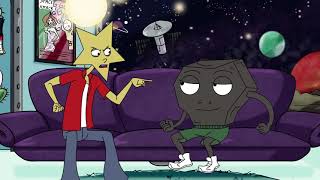 Ranch Up is about a small rock from earth (Roc) and a dim pessimistic star from the galaxies (Ctar) who find a way to relate over a serving of ranch dressing.