MagSafe is likely the future of wireless charging. However, its current charging speed can be improved and not everyone owns the latest iPhone. That's why we created ORBIT.

IRVINE, CA, June 10, 2021 /24-7PressRelease/ -- Charby has launched ORBIT — a magnetic set that brings faster MagSafe wireless charging and MagSafe compatibility to all Qi-enabled phones. It was fully funded within a short 75 minutes on Kickstarter.

ORBIT is Charby's take on Apple's MagSafe: an easy-snap-on wireless charging and accessory ecosystem exclusive to the latest iPhone series. ORBIT lets users add MagSafe magnets to all Qi-enabled phones, including Android phones and older iPhones, in a simple way. Just stick ORBIT's thin magnetic pad to the phone or casing's back, and every MagSafe charger, wallet, power bank, and others will snap on via magnetic force.

Apple MagSafe Charger charges slower on older iPhones and Android phones. Charby introduces a universal 15W Qi charger so all smartphones can enjoy fast MagSafe wireless charging. It even charges 24% faster on iPhone 12. By maintaining stable power output, it minimizes power spikes that cause overheating, which in turn may trigger the iPhone's safety mechanism that throttles charging speed.

"MagSafe is likely the future of wireless charging. However, its current charging speed can be improved and not everyone owns the latest iPhone. That's why we created ORBIT," says Ming Jin Cheok, CEO of Charby.

ORBIT also comes with a phone mounting feature to cater to people working from home. By attaching an additional pad on a wall, the phone will snap on securely with the help of the strongest magnet on earth, the N52 Neodymium magnet, embedded inside. It's attachable on any surface including the bathroom mirror and car dash, which makes multitasking in all places quick and easy, be it for a content creator, housewife, or anyone working from home.

While there is always a risk with crowdfunding campaigns, Charby had delivered 3 of its crowdfunded products to customers successfully. Charby plans to start delivering ORBIT this September. Each product includes a one-year warranty.

Those who wish to get ORBIT can make use of Super Early Bird discounts and gifts reserved for early backers on the Kickstarter page here.

The press kit is available here.

Charby was founded in 2017. Charby focuses on developing accessories that revolve around three core principles: Safety, Speed, and Simplicity. Since its founding days, Charby has brought 3 crowdfunded products to life, starting with the Auto Disconnect Charging Cable, Charby Sense; and followed by a fast GaN Charger, Charby Pico; and a universal cable, Charby Edge Pro. 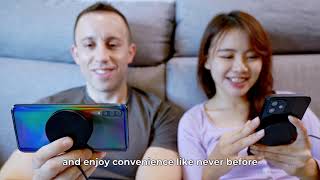