Dangerously Funny is a comedy reality TV show starring Jimmie Lee The Jersey Outlaw. Jimmie Lee performs outrageous comedy with the public on the street all over the country , old school "wise guy" style, with one liners, insults and zingers.

Pandemonium and Mayhem on the streets, No Holds Barred, Uncanny and Unpredictable !

"Dangerously Funny" owns up to its name with high energy , no holds barred, over the top , 80's style comedy. Jimmie Lee performs outrageous comedy with the public on the street all over the country , old school "wise guy" style, in the element of Rickles and Dangerfield, combining one liners, insults and zingers, with some Jersey Attitude. Pandemonium and Mayhem, No Holds Barred, Uncanny and Unpredictable!

The Jersey Outlaw creates excitement and fun with the public, including The Bandito Girls and Security, and performs in sunglasses and a dark leather jacket and Elvis hairdo, which is his trademark image. Jimmie Lee is most definitely not censored, not filtered and not politically correct.

Press and Media surround the Jersey Outlaw, as his charisma and "over the top" personality are contagious. Pranther Jackson of Hollywood Monthly says "Jimmie is a wise guy and master improviser, with over the top high energy comedy on the streets that will sting".

Jimmie's unique comedy concept has caught on because nobody does this style of comedy anymore. He truly loves and interacts with his audience and genuinely wants his fans to have fun and laugh. This New Jersey comedian has turned the world upside down with his comedy.

The Garden State can take pride to One Outlaw of a good nature, that's Jimmie Lee-The Jersey Outlaw.

For more on Jimmie Lee 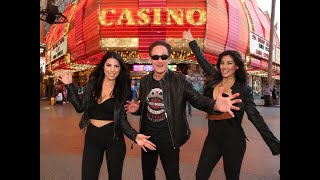