Jay-Z, Beyonce, Robert Kraft, are just a few of the elites at Michael Rubin's VIP party

Dante has been no stranger to celebrities and big brands though; having captured Lil Kim and her Notorious BIG celebration dinner, Ancestry Reveal for Mona Scott-Young, and other work for VH1, ESSENCE

BRONX, NY, July 10, 2021 /24-7PressRelease/ -- Bronx native Andrew "Dante" Hillmedo was one of the only videographers allowed in attendance to capture this year's biggest private celebrity event; a 4th of July celebration hosted by Michael Rubin; the executive chairman of Fanatics, partner of the Philadelphia 76ers, and co-founder of the Reform Alliance.

The star-studded event included celebs in music, hedge fund and real estate moguls, models, TikTok influencers, and big names in sports; including Beyonce, Jay Z, Travis Scott, Quavo, Lil Baby, Meek Mill, Megan Thee Stallion, James Harden and many others. Dante's capture of the event gives an amazing glimpse of just how epic this party was. Dante's ability to capture and broadcast the emotion or vibe of a setting and bring it to many viewers digitally is why he is continually used by big names in various industries. You can take a look at Dante's recap video of the event on his site TeamElitePhoto.com.

Dante has been no stranger to celebrities and big brands though; having captured Lil Kim and her Notorious BIG celebration dinner, Ancestry Reveal for Mona Scott-Young, and other work for VH1, ESSENCE, DreamDoll, and more. Dante is making a name for himself in the entertainment industry and has his sights set on the film industry as well as he sets out to take the director's seat in filming his first feature film; a horror film called "Mother" later this year.

Dante has expressed that he also has plans in the future to create an organization to train the youth in various forms of media related arts, financial literacy, mental health, and basic life skills in urban communities. He currently continues to film commercials, events, music videos and more under his company Team Elite Productions LLC. Check out more of his work at http://TeamElitePhoto.com 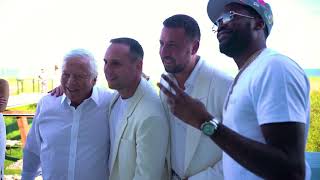