"The Patcher" is a game dealing with the conflicts and battles of migrants called Patchers in the background of post-apocalyptic fiction. The layer starts the game by choosing one of the opposing factions.

LOS ANGELES, CA, August 28, 2021 /24-7PressRelease/ -- Pixelity Games announced that it has begun running the open beta test for its VR game "The Patcher" on steam, and it will be officially launched within this year.

Since its foundation in 2017, the company has focused on global VR online multiplay, developing VR games that combine visual sensation and traditional game language. Also, the system and contents are being configured so that users can develop their own characters and they can continue the game experience in a multiplayer environment.

"The Patcher" is a game dealing with the conflicts and battles of migrants called Patchers in the background of post-apocalyptic fiction. The layer starts the game by choosing one of the opposing factions. In this place called Neo JS City, a special substance called orgadium is used as the source of all energy, and it can be exchanged for goods called pixels or defeating special monsters. Therefore, players will have to fight to get more of this material and make themselves and their forces stronger.

When players log in, they get to play games with users from all over the world who are connected. Even when offline, the virtual space environment changes and time continues to flow, so if players want to become stronger than others, it is important to constantly alternate between reality and this virtual space.

The game contents that will be released in this open beta test are Patch Build, where the players manage their own patchers, Deathmatch, where two factions achieve many kills for a certain period of time, and Battlefield, where users freely defeat monsters to acquire items and in-game money Pixelity Games announced that through continuous development, it will provider richer content for the official release at the end of this year.

Among the contents to be released first, in Patch Build, functions such as checking the status of the player's character and purchasing items or upgrading skills will be given, and an inventory system to manage acquired items can be used.
Deathmatch is basically an online PvP content mode where players from both camps who selected matching can show off their strength, and various matching modes will be added sequentially in the future. Battle field is a space where players defeat various monsters and acquire goods or items as PvE content. Sometimes, players may encounter ridiculously strong monsters, but if it is difficult to defeat them right away, players can grow up to become stronger or collaborate with other users to challenge them. Players can get rare (unique) items through these boss monsters, and Pixelity Games is developing the overall content of this game with the philosophy of valuing and respecting the play and game experience of these users in a virtual space.

The battle of "The Patcher" emphasizes strategy and judgment, and it is especially effective to fight while replacing three types of weapons--swords, guns, and bows--depending on the situation. If the players know where players from other camps are moving, the player can use sniper with a bow from a distance, or switch the weapon to a sword if the player finds an opponent with a bow for close combat to have a higher chance of winning the battle.

In addition to that, there are skills that help in combat and hunting, and players can fight by equipping one of the nine skills. In this open beta test, two types of skills will be revealed. If the skills are used well, the players will solve battles more easily.

Finally, players can grow their patchers stronger and stronger through gameplay. In the official release version, the concept of growing has been applied to most of the elements that affect game play in addition to just weapons and skills. The company trying to provide the joy of growing their own avatars.

Pixelity Games co-CEOs Raeseung Jung and Paul Daewon Lee picked three major points of "The Patcher." First, it is a virtual space, but as time passes just like in reality, the valuable game experience of players is recorded in the content. It is designed so that the play experience can be continued.

Second, the game grammar was structured so that "strategy" and "judgment" can affect the victory or defeat of the game. We have added various situations in the contents, so even if the player's reflexes and motor nerves are weaker than others, he can still win the game if he uses good strategy and judgment. Therefore, with these many variables, players can have new experiences every time they log in.

Lastly, it was also developed to help all global players to enjoy the game. Pixelity Games is developing the game with the philosophy of gathering people all over the world to have fun combating the monsters in one space. It uses its own network technology and know-how to handle the movements of numerous monsters and users in real time.

"The Patcher" is a VR game that has excellent connectivity and allows for continuous and repeatable gameplay. It is the product of its technology and passion, and the company hopes that VR users around the world can enjoy the game.

It is already partners with Korean companies including SK Telecom. To solidify its VR business soon, it is also working on cooperating with US telecommunication companies and IT companies.

Since its foundation in 2017, the company has focused on global VR online multiplay, developing VR games that combine visual sensation and traditional game language. Also, the system and contents are being configured so that users can develop their own characters and they can continue the game experience in a multiplayer environment. 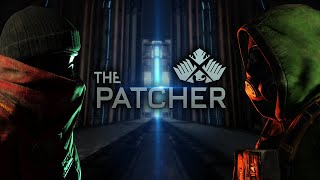