Great White Male Mythology Challenged in One Hundred and Sixty Minutes the Race To Rescue the RMS Titanic Makes Case Everyone Could Have Been Rescued on the Fateful Night of April 14, 1912 if It were Not For Human Failing

"The patina of the heroic patrician class bravely facing death must still be scratched away..."

CHICAGO, IL, September 01, 2021 /24-7PressRelease/ -- On the same day Titanic was discovered on the floor of the Atlantic in 1985, a new book takes a very different look at the events of April 14 1912. On that night The RMS Titanic struck a 500 billion ton iceberg with only 160 minutes before she sank beneath the waves. People have been told from Titanic mythology her fate was sealed and no one could have saved the 1521 people. The real story put forth by author William Hazelgrove is that every one who froze in the North Atlantic could have been saved if it were not for human failing.

The First Class passengers who entered the rowboats were told to ROW TOWARD A LIGHT that was so close Captain Smith told the passengers it was a ship coming to their rescue. Titanic then began morsing the ship with a lantern and sending up rockets. The ship was the RMS Californian commanded by Captain Lord who had gone to bed and his wireless operator had turned off his set.

The two wireless operators sent out SOS signals that reached New York and New Jersey and no less than ten ships that turned toward Titanic. One of the first ships was the MT Temple commanded by Captain Moore. The Mt Temple reached the Titanic while she was still floating with rockets shooting into the sky. Captain Moore then refused to enter the icefield and save the Titanic.

Officers on board the Californian watched Titanic sinking and saw her distress rockets. They woke Captain Lord up and pointed them out and he denied it was the Titanic even after he asked the wireless operator if there were any ships in the area and he told him only the Titanic. Captain Lord forbid anyone to speak of what they were seeing and left the officers to watch Titanic sink in front of them. The Californian was only ten miles away.

The lifeboats were less than half full and comprised of mostly First Class Passengers. Another 400 people could have been rescued if they had returned but only one boat went back. The other twenty lifeboats watched as 1521 people drowned and froze to death in front of them.

Only Captain Rostrom of the Carpathia came to the rescue of Titanic from Fifty Miles away zigzagging around icebergs but he was too late to save the 1500 people in the water. Newspapers interviewed the crew of the California and the Mount Temple along with passengers. Captain Lord was found guilty in British and American inquiries of not going to the rescue of a ship in distress and was disgraced. Captain Moore escaped the inquiries but history has finally caught up with him after voluminous testimonials by a crew that contemplated mutiny and passengers who were forbidden to go up on deck but snuck up and saw the Titanic sinking.

The awful truth was everyone could have been saved on the night of April 14 1912 if it were not for human failing. This is the story that Titanic mythology has covered up for over a hundred years. William Hazelgrove shows in One Hundred and Sixty Minutes The Race To Save the RMS Titanic that tragically human failing was the real reason people died on that fateful night.

William Hazelgrove is the National Bestselling author of ten novels and nine nonfiction titles. His books have received starred reviews in Publisher Weekly Kirkus,Booklist, Book of the Month Selections, ALA Editors Choice Awards Junior Library Guild Selections, Literary Guild Selections, History Book Club Selections and optioned for the movies. He was the Ernest Hemingway Writer in Residence where he wrote in the attic of Ernest Hemingway's birthplace. He has written articles and reviews for USA Today, The Smithsonian Magazine, and other publications and has been featured on NPR All Things Considered. The New York Times, LA Times, Chicago Tribune, CSPAN, USA Today have all covered his books with features. His books Tobacco Sticks, The Pitcher, Real Santa, and Madam President have been optioned for screen and television rights. His book Madam President The Secret Presidency of Edith Wilson is currently in development. He has four forthcoming books. Sally Rand American Sex Symbol, Morristown The Kidnapping of George Washington. The Brilliant Con of Cassie Chadwick. One Hundred and Sixty Minutes, the Race to Save the Titanic. 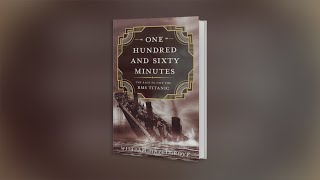